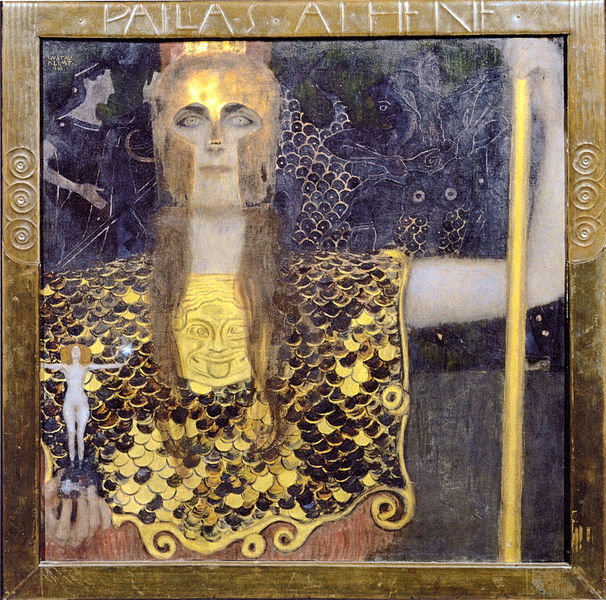 Athene and the Sundered Veil

I called/invited Athena today, and last night I dedicated myself to Mabon and dedicated that wand I fashioned from the wood from Saerien’s wood.

Athena showed me behind the “veil” and “curtain”—I had wondered yesterday where K. and my living enchantments “go” to do what they do—and all I could think was/see was a web of strands and energies and the notion of “backstage.” What Athena showed me was much the same—as she reminded me of the power of the metaphor of pulling back a curtain, sundering a veil. She drew me along into Chaos, into raw potentiality and causality—really, Gaiman’s notion of “backstage” in American Gods isn’t too terribly off, all things considered—but that Chaos includes and leads to all other realms. And she said that what lies beyond the world is Chaos & Old Night, this world’s rulers and parents in that they surround, support, and nourish this and all worlds. The strength of men and gods sustains this world’s integrity. Its solidity. It also shapes it. (Or limits it.)

She let me grasp her spear [as she held it], and it was of Chaos and like a lightning rod, a conduit, Chaos forged into something of a tool or anchor for Chaos. I must do something to find/fashion my own tool. My blade is not attuned, prepared, resonant, and I must make it so. She agreed to bless my blade, to help start me on the path to making it so.

Her spear, her shield, and the Aegis are all related in these things, and Odin’s spear, hood, eye, ravens & hounds serve him in these ways.

Athena is also very imperious, a giantess of grey metal or stone, and I found myself on my knees in the end. She sees herself as a goddess in this way.

A leaf, tree, and more

I also did a reading—generally positive, stressing the need for me to negotiate two worlds.

Beyond the initial web of Chaos, the Summerlands is there—with other places. Beyond the shadows, where the shadows point—Chaos and its Realities. Meditation is a starting point to commune and explore Chaos.

It was a hard Monday morning. The WTAW are what helped me today.

I relaxed, Iron Pentacled, and invoked.

I want to meditate more—after relaxing, it can help reveal things. The Veil of Chaos, for example, opens into web vistas and knotworks and women using WTAW and sigils to communicate. And Chaos and those sigils—they undulate and move like pythons—there is something there.

Holding the blade can transport me into Chaos—or help me visualize a transition. And __________can anchor.

It has been suggested that calling my Devil—may help break old and persistent blocks. The Mastigos you know, after all. However, I’m not sure how or if to proceed—but that means I probably should, I guess? Or a fae—or someone else.

I dwell too much in experiences and narratives; no, I allow myself to dwell too long, and too deep, that I allow them to rule me, so I rebel. I rebel, resist these unpleasant wyrms and linger within others—or I feel I must escape. In that sense, “maya” cloys at me overmuch. In living in art, even my melodramatic life, I become bound and subject to that art, rather than remaining free and creative. This is always a danger, I suppose.

And I see how I am in danger of succumbing to honeyed romantic delusions—the WTAW for this life, for why I am here.

It is living the wrong life that I fear. (So it goes for everyone.) But I resist thinking/believing that I came to find/follow some specific person.

Holding a staff or spear—there’s a handedness to this action that helps ground you into and against Chaos and the forces I sense there. It may be psychosomatic—a decided, enhanced focus, the somatic action the sort we take to insure maximum stability. She [Athena] emphasized the theatricality for me; the act of parting the veil and curtain, holding the spear. What is that act?

_________ frames all that as a matter of scaling—but, well, it’s webs and causality and things like that for me. (cf. the roots and sense of my Wyrd)

But K. and the living enchantments go there—and people insulate themselves from it into one narrow envelope of causality (no, experience). (I mean, we’re always already out in Chaos, limiting it into the existence we experience—or at least that we perceive/conceive.)

How do I prepare my blade to do what it needs to do? By using it to navigate, to explore, shape, weather Chaos. Attuning it to those energies. Imbuing & dedicating its resonance/energy towards those further purposes.

Mind you, ____’s recent points regarding binaries are good ones to take to heart. The Chaos paradigm is but a paradigm and a filter, but it’s one path to reality.

(Not truth. Not even reality. Existence. Experience.)

Why is wrangling Chaos a martial/heroic action? (Because myth has always made it that way—Marduk & Tiamat; Zeus & Titans and Giants, dividing day from night—slaying Ymir and Milton’s Satan, etc.)

But doing so is more galdr-like and male

But seidr makes it plain that there are other ways of working with Chaos.

But the weapon is not the only way—

Freya may be the—no, Athena pointed me toward seidr/meditation as path as well—Odin as ergi, Loki, but Freya learned & Athena is of both genders

Being capable, adept at both—that’s a mark of distinction of some kind.

Chaos as perception—the Veil is the Veil of Perception but this realm is meta-stable (stable of itself within the Chaos—that MS emerging in part from consensus and paradigmatic/logic/magic/etc.

Seidr navigates, weathers, flows into and through Chaos—Chaos remains itself.

Weapons and such shape Chaos, forge it into limited forms—“tame” it

All worlds are already here.

Realms were traversable before the “Multiverse” concept, but it was land to land, not world to world.

Europe conquered and shaped America, but America shaped Europe in turn. It is not the number or power of dreamers/shapers, it is not even their skill after a point—but how much and if you resist being shaped; if you know to avoid and spurn it.

Words and speech are martial weapons—and amulet-like as armor