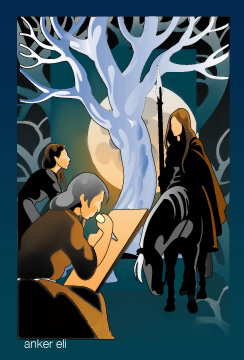 I’ve been dreading, and dreading just stresses me. To be calm isn’t even difficult—but you have to—engage the world, touch it. Touch and corporeality, inhabiting the landscape and environment. I guess I had this easier in an outdoor environment, away from monitors. Kinesthesia helps ground one and have a Presence. Stress and anxiety forces me into my mind and disassociates me—I mean, nerves are one thing, but—

–and vision, when relaxed, is easier—the mind can dance. Because your mind has its movements, its rhythms. And it’s easier to think of and as yourself. I was so preoccupied this morning about loans and style exams and all the errands I planned, needing to exercise and have time—always rushing to fill time, to fill my time, but rarely with—well—calm or contentment.

The desperate fear that things will slip away—

Last night was the full moon, and Dana and I went into Saiyûnor into a faerie’s dance about a fire fast fast fast, but it was slow and delirious and even low gravity languid—

I placed a root and sliver of Elethis, of the Green in __________, and I think I will do the same to myself. I’ve been channeling the Green, but I’ve not tried this—it’s almost like a hack.

I’ve caught my reflection in doors sometimes, and I look—far better than I think I should. I fret and [glower] and, I think, I make myself look worse than I am.

I want to do magic.

I want a lover and beloved.

Beyond the plan above regarding a root, I’ve thought previously that tantric and yogic practice really ignores everything outside the torso, hips, and head—but channeling roots of the Green into me but also through my limbs strikes me as a good idea, and I easily imagine my own “root structure” in my vascular system—it makes sense and offers a means to direct elthil for healing and the Presence in what may be a more kinesthesic manner.

I want others to see me as fey, I want to think of myself as fey, I want to live as fey, but I worry about people knowing because of what people are like. And that sense of identity is something that gets easily lost and occluded by hurur, halthaya, and—well—the busy worries of my mind. It’s not that that fey identity is my only basis for that identity, but ignoring or losing that closes me off from some vital wholeness—concretizes a cyst of ego rather than a wholer sense of self.

During my ritual, I thought to actually project the WtaW for the Guardians, which seemed to make them simultaneously human and dragon and more present. During the convocation of the Pantheon, Angus told me Dana—Morrigan—was my mother. I had a sense of that nativity for a moment, and to grasp both their hands at once was—

In med’n in elaith-tir, I found myself melding with KL—I was giant, tall as a tree, confident and strong—in turn, I melded AL, and after a bit, they felt more a fusion. I proceeded through LtY and LT and finally M—this strikes me as a valid practice to pursue.

In projecting, into Saiyûnor, I focused on channeling while using __________ at titanic scale. Dana seemed fine with this, and after a point I began attracting a gang as Dana, Angus, Athene, and Odin joined me. While titanic and hanging out with this part of my Pantheon, I worked to incant across the Dream into the Real and blessed _____, _______, and myself. This was the longest I spent titanic and channeling the Green.

I also spent time rejecting my anxiety, paranoia, etc. while embracing my faerie nature and that which I do want. I was reluctant for a long time to embrace my mother, to see the goddess, to even—try to embrace my nature. But now I want the waters, or to at least get wet. Why did I fear my mother?