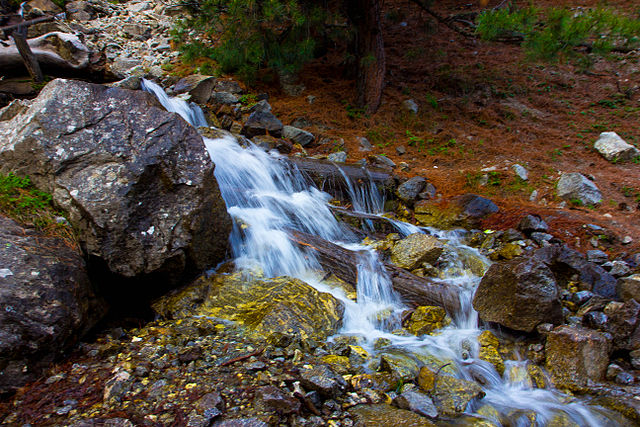 Last night, K and I headed into the Otherworlds, towards Elethis. K said that wearing paths into the Otherworlds is a time-honored tradition, and people wear paths in the real, in their minds, and in time (our lifetimes, after a fashion, but habit and intention, too). So we moved up the path again, and I asked him about the barriers. We connected them to barriers in Enochian, to Daath, and the “BARRIER—PASS NOTS,” but they’re also trance level markers, I think. There’s a point at the trunk that the Morrigan doesn’t want me dealing with yet, or feels I’m unready for.

We moved up to the stream again. The berries were tasty, but not filling. Stress led me to the waters to refresh. They are waters that flow from TTG, from the HW. I drank some and refreshed, but I also chose to bathe and submerge in the waters, and K thought this was okay. While it felt great, very relaxing, and—lightening, feeling light, shining—it also drug me downstream. I emerged on the far bank, but it seemed wilder, rougher, darker, and we crossed back over. We were off the path and in the wilds, a thicket. I shrank down and rode K back to a point on the path, and we rested.

The waters left me a bit disoriented, and I forgot K’s name briefly, calling him G and something else. It was a bit like having something washed away, leaving me clean and lighter, but I needed to reorient again. Mortal cruff was washed away, —hell, I felt shiny and purer.

The descent is easy and fast because it leads back to this incarnate realm as home position. The ascent requires some wearing of a path for my self and spirit.

We noted a still pool might work better than a flow, and K noted Lord Demri had a sidhe/brugh nearby, for directions. I hedged but K talked me into visiting to learn of a path rather than trying to follow the bank through the wilds. We went to the brugh entrance, a bit hobbit-hole-like, and I called and announced ourselves. Demri welcomed us inside, and he offered us wine—berries, fruit, and flowers—sweet, light, intoxicating—faerie wine!) in a crystal chalice. He told us to follow the path till we came to a way marker stone, and to follow a trail to a pool from which the stream flows. He noted a nymph at the pool. We then thanked him—and we headed back to the glade.

I played with my gloves and boots before we ventured into the [city] labyrinth. It is a dark, dim locale, but there’s something there I want to explore, but it is maze-like in the nearby MW.

I spent the ride to work thinking about taking the Otherworlds into me, but also opening myself to them. It’s tempting to be acquisitive rather than open and immersive, and immersive seems better for me.