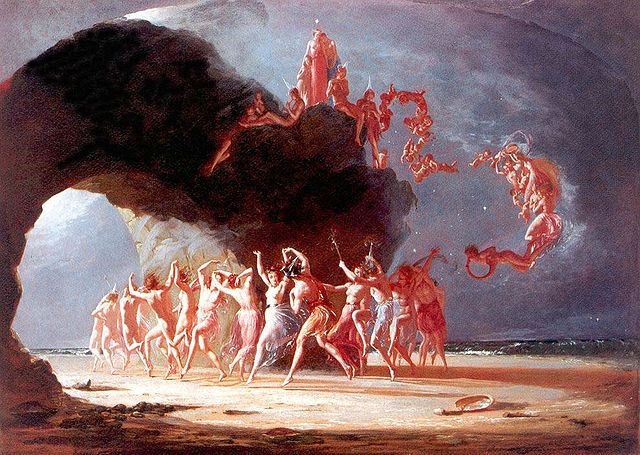 I walked and spoke with JW earlier: MW has been out exploring of late. JW says things are busy and active near the more chaotic border marches, closer to Chaos and the Deeper Reaches of the Otherworlds. She has only explored the [Middle Worlds], and close approach to the HW and LW has been problematic, for the ways have guardians, predators, and hazards—

—but I see there are orders, fraternities and sororities, master and apprentice chimerae out there who have more experience. I point her towards the larger, older cities, like NYC, Paris, London, even Chicago, but LA is stranger, the influence of Hollywood warping things in distinctive ways. MW will be back tonight, so she will venture then after apprising MW and VU. I warn her of opportunists and con artists, those who seek to enslave or feed upon chimerae. I mention New Orleans as perhaps being more free wheeling.

Morpheus posted a snippet about trance verse incantations to the Morrigan, or Cu Chulainn’s similar verses in battle rage and the associations with Nemain as an aspect of the Morrigan who habitually does such invocations at night.

I have felt today something like a wound within me, in my chest—the crow caws, but there is still a tension and a pain in my heart. I think it is in part stress and anxiety, wanting to vent and release. Part of it may be that I want to magic more up—but I think I over-complicate my magic. The versicles may be one approach, pointing back to the Nemain posting.

JW seemed surprised, impressed, but also a bit envious at how I pulled lore out of, well, the Dream, out of the Otherworlds earlier.

Levi frames magic and being as arising from, or even leading to speech, and speech leads to meta-awareness. Or, more properly, reason and being lead to speech of thought lead to speech as act leads to…action.

[hexagram] He frames all that as an ascending triangle pointing to some transcendental height and another mirroring to the abyss.

I find myself with plenty of words that I try to turn to move me, to carry me towards action and power. But I also find myself reminding myself of mindfulness and Presence, my body not grounding me but inspiring me, providing an avenue into this realm for Otherworldly power. One end of a path, a bridge, but also a reminder I am not slave to my mind and dreams and false fantasies and fears. For my mind lies within potentiality, and with the action of body can create actualities.