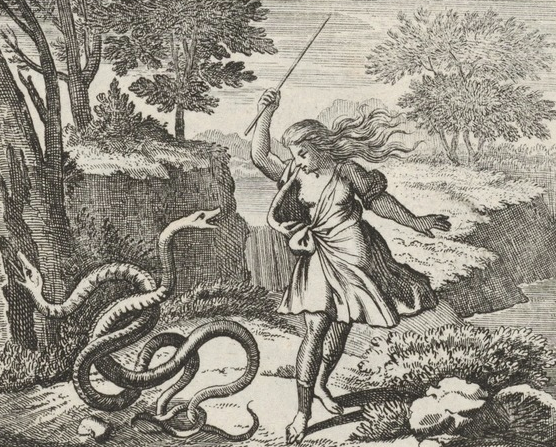 Wyrms that Are Wise, Experientiality, Otherworlds

I started writing an article on the Feri Guardians, but I found myself referencing the Wyrms that Are Wise[1] (WtaW), and I realized, well, I should probably talk about the WtaW.

All symbols are alive. Or they can be. Or some are more alive than others. Some symbols are more alive for some people than others. Chaos Magic has tantalizingly mentioned “living” or “moving” symbols in a few places, with exhortations to banish vigorously if you notice that starts happening.[2] For Arioch’s sake, they’ll say, if your sigils start moving, stop and banish!

What do I mean by alive? I mean a sense of vividness and something like life. Obviously, symbols tend not to be alive like we ordinarily encounter living beings.

All symbols point to experiential realities. If you’re at all familiar with the Golden Dawn’s use (imperialist appropriation?) of tattwas for, as Israel Regardie terms it, exercising the “spirit vision” (volume IV, book 7 of The Golden Dawn), then you’ll know that the GD would have some students “project” into the tattwas. Tattwas are on one level nothing more than color-coded shapes—symbols—that in the GD system point and lead to elemental worlds (fire, earth, water, air, and spirit). You would vividly imagine the tattwa before you, and imagine yourself stepping inside, arriving into the appropriate elemental Otherworld. You would do so to learn and experience more the mysteries of a particular element and that element’s significance for you and your life.

What do I mean by an experiential reality? I mean a reality we can experience in some way, whether it’s this Earth realm or some Otherworld or some “imaginary place” we encounter while reading a book or watching a film.

Now, the functional difference between the Otherworlds accessed using the tattwas (say, for example, Tejas the tattwa of Fire) and the other Otherworlds you might project into in trance (say, Muspelheim), and the Otherworlds you might encounter while daydreaming (into, say, I dunno, the Firelands from World of Warcraft) is arguable. All partake of Fire in some way, but they’re by no means the same Fire worlds. All are arguably “imaginary,” depending on how much negative baggage you attach to that adjective, but they are all realities you can experience. You can certainly immersively experience them.

Now, let me also say that if your first encounter/exposure to the Otherworlds comes through pop culture and art—well, cool. Engage critically and see what moves you and helps you without merely obsessing you or fluffing your ego. The old standard is that you should feel a sense of otherness and alienness about occult experiences—otherwise, you may be merely daydreaming. And there’s nothing wrong with that: a good daydream can be quite meditative and illuminating. However, don’t mistake daydreaming for other experiences.

All experiential realities have a ruling intelligence. Now, I say intelligence here because it gets around identifying whether that intelligence is a god, spirit, dragon, Talosian, or whatever else. My personal experience is that those intelligences tend to be draconic (at least by our understanding of such), but they can probably also be angelic, demonic, egregoric, etc. It may be that I tend to deal with “draconic” realities, too.

Our corporeal reality—this Earth realm—also has its ruling intelligence. My experience points to, well, the Midgard Serpent, to Jörmungandr, though I haven’t really tried to pronounce that name. And I’d probably would prefer to ask hir what name hir’d prefer, or pull one from trance. Of course, some of that also gets at questions of what constitutes “this Earth-realm.” I can kinda see the Midgard Serpent as the intelligence of Earth within a Xian paradigm: the “god of the earth” is the devil, ol’ dragon that he is.

The Wyrms that Are Wise are then the “spirits” of symbols and thus the intelligences of the realities those symbols point towards. Some writers have commented on Norse runes having associations with spirits. The Enochian characters have similar associations with the various Enochian angels, spirits, etc. Sigil magic, from the Goetic and elsewhere, has associated spirits with markings. I would say that the symbol itself is just a symbol, but we look past the symbol towards where its shadow points. A Goetic magician uses Buer’s seal and sigil as a bridge to wherever Buer exists (or maybe the reality of Buer) in order to call Buer here.

I would argue that you can project into or see beyond any symbol. What realities do the Golden Arches or other corporate logos point to? Look if you wish. (I try not to.) If you want to understand the magical aspect of corporations, though, it might be a task to take on. Even something innocuous like the letter a points to something. That reality is obscured by the very quotidian nature of a—this sentence has seven instances in it. However, keep in mind that a has a history, and different versions of a probably point to different inflections of whatever realm(s) a points to, let alone its early cultural associations for a’s like aleph and alpha and so on.

In my practice, certain WtaW have come to me or been given to me. Athene gave me [Elethis], after all, which led to noticing the huge World Tree over there. These have some significance for me, but I accept that they may mean little to others, or may mean something different. They likely also point to some experiential reality for you that’s different than for me—or your perception of that reality is different. In a few cases, I have found or communed or communicated with the intelligence, the wyrm of a WtaW. I treat them as sigils, as runes, as symbols. I see a good amount of crossover with Chaos Magick’s sigil magic, and Austin O. Spare’s alphabet of desire. (I take said alphabet as Spare’s attempt and suggestion to make our own runes and cosmologies and magical systems that have immediate vivid power for us rather than relying on other people’s systems, like the FUTHARK, Tree of Life, etc. etc.).

[1] I borrow this phrase from Michael Moorcock and his The Eternal Champion series of novels. John Daker has dreams in which he hears chanting, and that chanting includes lines like “The Runes on the Sword are the Worms that are wise—The Names of the Sword is the same as the Scythe.” It was evocative enough for me, especially since the “Worms” were runes of some kind, and living runes were very much something that pinged for Talker/Dariar.

[2] I went looking for the references I’ve seen in either Hine or Carroll, but I had no luck as I drafted this article. I’m pretty sure I highlighted and noted something on my old Kindle once, but—well—it’s my old Kindle…