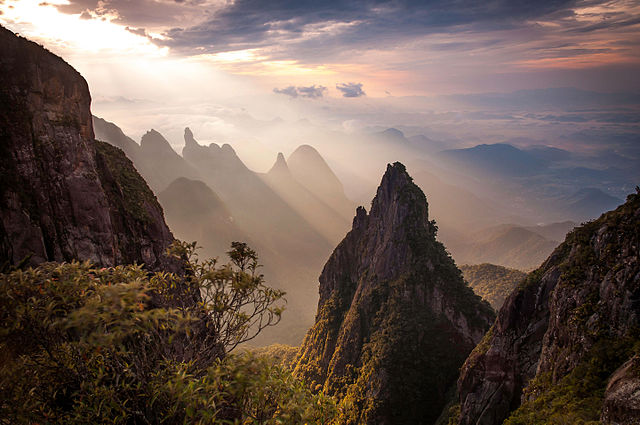 Now, in speaking of imaginary things, I know that we have been conditioned by consensus reality to conceive of imaginary things as being false and unreal things. Of course, consensus cultures view atypical views of deity as being imaginary and thus heretical and false, as being illusions or delusions divorced from reality. In a similar manner, magic and the supernatural, the Otherworlds, are illusory and delusory, but their enchantment comes in part through that imaginal quality, that quality that renders the Otherworlds (or our experience, including gods and magic and wonders and spirits and so forth) as irreal.[1]Something irreal is not necessarily unreal, but it may not match consensus views of real. After all, art and imagination point to real things—the ideas and images exist and are thus real—even if those things may not actually exist within consensus reality.[2] Within a multiversal model of reality, the irreal may not exist in our current reality, but it exists somewhere and sometime. The irreal possesses an arguable objective reality that may not be immediately objective to our present reality, but it is not necessarily false or unreal. We can see the gods as imaginary, but we can also say the same thing about places and persons we have never met in person (“in actuality,” in this immediate physical presence) and about ourselves, as well.

Arguably, the process of disenchantment seeks to lay sole claim on the spiritual light and how we “lens” it into manifestation and how we understand it. According to Sung Ho Kim, Max Weber associates the disenchantment of the world with the rise of monotheism in the West, and older, contingent, localized ways of conceiving the self in relation to the world and society gave way to “a unified total system of meaning and value.” That is, the rise of disenchantment coincided with the rise of monotheism and monotheistic ways of imagining the universe and self from only one approved perspective. As disenchantment progressed, even monotheism became too messy (“irrational”), and monotheism found itself in ideological competition with modern materialism, especially as a means for “orderly value-creation.” However, disenchantment even lays claim on science as scientific progress must constantly seek to surpass itself to be meaningful and valuable. Weber sees this process continuing until the monological worldview–a world view which admits no other views as real or valid–necessarily fragments. Weber argues those fragments splinter based upon “aesthetic values” grounded in “taste.” This fragmentation may lead to enchantment again within a “polytheism” of values. Where Kim and Weber use “science,” the association with “value-creation” point to science’s capitalist appropriation.[3] What interests me in this regard is the monological claim on meaning and significance–how the culture should direct the imaginal, spiritual light–leading to a narrowing (not quite literal) focus. Those who frame their Spheres of Sensation or Talkers in non-sanctioned, heretical manners lack value or are otherwise deranged or delusory. At the same time, the world remains ostensibly “enchanted” within such a monologic, albeit only for those who submit to the particular filter or lens to perceive the world through. “Disenchantment” then serves to filter out or exclude other ways of transfiguring the world.

The self is also a product of the imagination, and the GD’s and other systems predicate initiation and training upon this imaginariness while aligning one’s imagined self around, say, the GD’s particular filter. It may seem odd, perhaps insane, to conceive of yourself as imaginary, but I think that sense lessens when you think about it. After all, we imagine ourselves all the time, even if we lump that imagining in with our everyday awareness of ourselves. Our fantasies involve us imagining what we want, imagining different situations that we may (could or wish to) find ourselves. Every action is arguably preceded by us imagining doing the action: we imagine hanging up a picture before we actually enact what we have imagined.

Western occultism runs with this sense of things, and the GD approached the imaginariness of the self through the fashioning of the sphere of sensation. For the GD, the early stages involved memorizing “important correspondences and attributions”—the symbolism of the GD and hermeticism—using that symbolism to access the Unconscious. Indeed, the magus internalizes and weaves the sphere of sensation so that one reproduces the Tree of Life and its paths within one’s aura.[4] Arguably, this end reflects the purpose of exercises such as projecting the Tree of Life onto a sphere—the sphere in question being one’s sphere of sensation/aura/Talker/Ruach. Once one completes this task, one can then connect one’s recontextualized microcosm (now incorporating the symbolism of the GD) with the (GD-imagined) macrocosm. Accordingly, initiation reflects adapting Talker to reflect the symbology or paradigm of whatever culture is pertinent. For example, high school graduations ceremonialize students internalizing a view of the world agreed upon by the government and teachers as one to initiate students into. Graduation reflects a student satisfactorily reproducing a worldview within themselves in accordance with curricula expectations. So too the GD would test acolytes for their understanding of GD symbology, and many witchcraft traditions do so. Implicit (or explicit) in this enterprise is the reimagining the acolyte from within the new symbolic system: one imagines oneself a magus or witch, with the accompanying shift in perspective that role (and knowledge) entails.

Such an enterprise is ultimately one of self-definition and self-identification, and thus connects with our contemporary concern over identity and queerness. Jung’s work with active imagination explicitly conceives of personal psychology in this manner. Persons use art while in a playful, exploratory trance state to encounter images and symbols emerging from the unconscious. The ego confronts these images and must reconcile itself with the Unconscious. Jung frames this process in terms of a dialectic: the ego encounters an unconscious image, and the ego ultimately comes to terms with the image or otherwise revises the ego’s sense of identity to account for the new element.[5] Jung famously explored early modern alchemy from within this framework in ways that pointed to alchemy as a particular approach to “the Great Work” or other integrative practices that use mysticism (and mystical imagery) to do so.[6] On a more mundane level, Jerome Bruner has argued for narrativization as a fundamental human activity as humans tell and invent stories out of their lives and to make sense of the world.[7]

In terms of magical attempts to use the imaginal light to change the self, magical traditions often frame light as descending down from the “higher self”: God-Soul or Chiah or otherwise the crown “chakra.” GD-derived rituals typically involve calling down—imagining—brilliant white light originating from over one’s head and then coming down into the aura and astral body. For example, Donald Tyson is typical in this regard:

Imagine a bright blue-white star blazing in the heavens directly above the top of your skull, but far away in the distant darkness of space. Raise your point of awareness to the star and enter it. For a minute or so, feel the star all around you, enveloping you within its intense electric whiteness. Deliberately extend a ray of the star’s blue-white fire straight downward so that it passes through the roof of your house, the ceiling of your practice room, and the top of your skull, to focus at the center of your chest between your nipples. This place in your body is known as your heart-center.[8]

Coyle in turn acknowledges the Middle Pillar as well as other techniques, pointing to the Anderson-derived teachings on soul alignment, with Sacred Dove or God Soul “hover[ing] above…[a] halo intersecting [the] auric egg and…auric body, it kisses the top of [the] head.”[9] In most systems, the purpose of magical practice is to guide one’s light from above through the “lens” of one’s life here and now, imagining and fashioning oneself with self-possession as one goal.

[1] For a working definition of irreality as pointing to ” particular versions of reality rather than actual descriptions of it” (emphasis mine), see John Gardner, The Art of Fiction (New York: Knopf, 1984) and probably “Irrealism (the arts),” in Wikipedia.

[2] Sidney and many Horace-derived authors would concur, and they would even see fictive (irreal) moral examples as being better than real world, historical examples because history shows us that most “successes” are also assholes. See Sidney, par. 31.