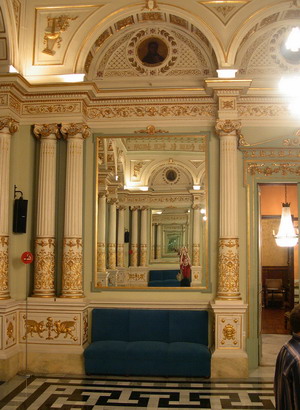 I ponder the leviathan and myths and the Otherworlds.

When you are working on your culture and your practice—

Even romanticized versions of old myths can be turned to Leviathan. The Leviathanic character armor encourages uniforms—and invasion & violence—the violence of colonizing others, of reducing others to value & debt & more. Reification & commodification—unfair, opportunistic trade—totalitarians & absolute hierarchy—

I work on trying to step out of the armor & leviathan for a time. And if you can have others nearby also without the armor, then you can be okay. But others carry that dream of iron with them, remind us & pull us back in. But what can we make to protect ourselves? To avoid the leviathan? Is it—

I armor myself with light & songs & eternal things. I often say this in my practice.

Do we imagine returning to a world of commodified glamour, & therefore engage in conquest & murder & slavery? Some alternative spirituality folks have been imagining something like that since at least the ‘90s.

Thus, a dream of iron

I’ve been listening to the Rune Soup podcasts of late while exercising. It’s about the only time I feel like listening to podcasts, for I generally hate the things. I’m used to reading, and I’ve heard too many podcasts feature far too much rambling and hedging. But I listen to Rune Soup and Gordon White talking to folks.

Now White very much has his own slant on archons and what we’ll call leviathans here, and all that. And the subject of psi research comes up—I’ve re-read Jung’s Synchronicity lately, too, so that’s all close to mind for me—and psi research has probably helped the Leviathan do many things, but probably not at the scales it wants, and psi (& magic) are so weird & idiosyncratic—now, the Leviathan has worked to shape consciousness along the lines that support the Leviathan, but that’s Foucauldian discipline, not ESP & TK. I think Leviathan devotes most of its psychic energy it thieves on individuals passing for normal & sustaining Leviathan’s glamours.

The rest of it is just glamours of the Leviathan that White sees, I think—there is lots of shady, evil shit, but…

…& Leviathans may read the weird as aliens or even as magic, but that only leads to Leviathanic synchronicities & tyrannical diversions. That is, political leaders go weird in private, or they notice weird shit that they can only parse in terms of the symbolism of the Leviathan.[1] Hell, UFOs & shit may be Leviathanic synchronicities—projections thrown out into the world. Leviathan imagines other Leviathans, or monsters & criminals (slaves & fodder)—& I wonder if Leviathans look at the Sky & see Sky Leviathans (yes, a voice says) & Spirit Leviathans instead of Many-Colored Lands & High Sky & more.[2]

And they listen to the sounds of droning desert insects, the moaning song of thermal differentials & perceive the Wilderness Other, as demonic rather than as embodied life and death—for Leviathan is in many ways order-gone-rampant—even as it feeds on death (no, on life & consumption). It forestalls its entropy by sacrificing others, like a vampire.

I’ve alternated from Perlman to other writers and texts, and that includes Tolkien’s essays. Tolkien engages in (a simplistic and reductionist) mythic interpretation of Norse vs. Olympian myth—argues the gods participate in the world in the Norse, see the human Scandinavian heros as allies, etc., against the monstrous Other & darkness, but his heroic thread smacks a bit of Leviathan.

(Contrast & Tangent: The sunlit, vivid, many-colored lands—we find shelter in the shade & shadow, & we can thrive & shine there, for the day—I glimpse peoples gathering with scarfs, ribbons, banners—we need the shadow under the Tree to avoid burning & being washed out. To shine as individuals, you need the shadow—& it makes me ponder “Middle Earth”/Midgardr & “fortress of humanity”—and thus embodied, incarnate existence here and elsewhere)

Tolkien perceives the Leviathanic mythology, but he doesn’t embrace Norse myth, but he resorts to active imagination instead, connects to nature in ways Nazis don’t, rejects the acceptance of capitalism that Jung embraces.[3]

What Tolkien notes re: Beowulf is that it is mythic in its setting, conflicts, etc., & not merely political or historical, though it certainly is those to degrees. And, well, the mythic is political, even if you dive into mythic time, you deal with mythic politics of some kind. Let us avoid uncritical engagement with mythic reality, which undergirds some folks’ romanticized ideas about sacred anything.

In the moaning song of thermals, we hear the wind & voice of place. In the drone of insects, we hear their invertebrate intelligence, sense their presence as mind & spirit & dreaming. And bird song & soughing…

I came to think about “leviathans” and such through other routes, other metaphors. I’ve felt how, during practice, I try to shine forth from within—in fits and starts and torrents—even as I will also try to have my higher spiritual self (Elaith, God-Self, Sacred Dove) shine down and fill me with “Shá” and light, etc. etc. And I found myself aware that I was consciously obscuring that light, that I was working past not only my own character armor but also a shell of personality and identity.

I’ve written here previously about trying to “re-weave Talker” (or Dariar) into a freer, self-possessed, enchanted, empowered version of Talker. And I’ve perceived that shell which obscured the light within as part of Talker as dust and something caked on, as garbage and detritus inside corridors and tunnels (in visions and dreams), as an English-language linguistic and social “shell” (using both an egg-shell and UI shell metaphors) that hindered conceiving & perceiving the Otherworlds, as a mirror wall facing inwards, as a labyrinth and maze I was caught within. I think all of these metaphors—and more—are applicable, and part of the process entails each of us learning how we’ve donned our armor and how we can best take it off.

That said, I think there’s something to be said for perhaps costume armor, so long as we avoid letting that costume become actual—and even as part of me wonders if there’s a real difference. We should be cunning and learn to choose our confrontations and avoid being caught out and harassed needlessly.

[1] I think this weirdness level is what some folks talk about when talking about global political authorities’ “cargo cult” mentalities, but I’m not sure. I haven’t felt like digging that deep because your Talker starts running into other peoples’ rampant Talkers.

[2] Leviathan looks at the open and chaotic and imaginal Otherworlds and sees Hells and Inchoate Chaos and HP Lovecraft Mythos Horrors—which they also then project onto the Other: queer bodies and lives, other races, the poor, women…

[3] Some people might disagree, but I would argue that for Jung, active imagination relies too much on ego and normative psychology. Hegelian dialecticism arguably just leads to the monological adapting, not actually healing itself or accepting others.