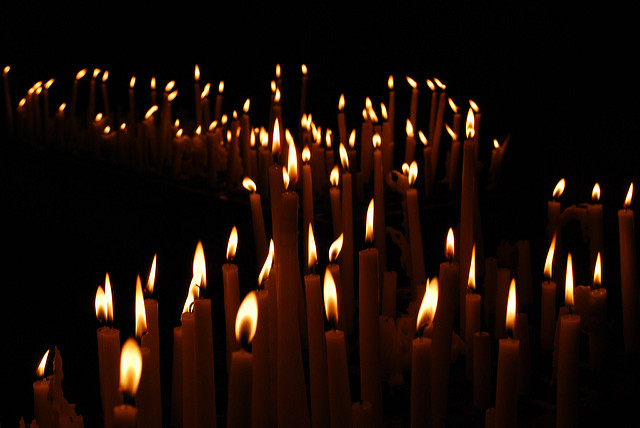 I’ve noted that pulling down the light—or even calling it forth from myself—goes more easily when I have light present. Of course, sunlight is fantastic for this, and there’s a reason that “solar adorations” have been a thing (let alone the moon!). But candles also help. It makes me wonder that having light on hand makes it easier to work with “light” and energy otherwise in that the candle’s light lends itself to us. In talking about some of this with a friend a few days back, I noted that it would not surprise me that’s part of the point of working with candles in magic and practices: you need light and light.

I’d seen this article by Christopher Bradford from back in May, and I’d discovered Bradford through Gordon White’s Rune Soup podcast. Bradford describes one of his workings with the simbi in Palo:

I would go out to the crossroads closest to my home at Sunrise, and take up pemba to draw that firma upon the ground. I would give it Light (mpembe) via a candle, and then blow rum and smoke from the cigar to spiritualize and sublimate the firma, and as an offering to share in my consumption of the tobacco and speak through the trance it can induce. [emphases mine]

Wonderfully concise and conveying praxis and theory, Bradford’s description brought home how candles do provide practical and spiritual light (light and light, as it were), even as you can see how smoke and spirits help in similar ways.

At the same time, several folks—including White—have noted how firelight signals alternative time, especially to those who’ve grown up with electric lighting. Drawing on anthropological research, White argues that, in earlier eras, firelight may actually have signaled or spurred an awareness of a time different from daylight time. Daylight time and its associated activities focused on work & gossip. In contrast, firelight seems to have encouraged “imagination cultivation” & ritual. He connects this with fire gods, too, as tricksters, as Promethean figures bearing (and kindling) inspiration, and as conveying civilizing metallurgical lore.[1]

I suspect the play of firelight also helped in theurgic and hermetic “god-making,” let alone the use of firelight with cave paintings resulting in “animation” and the old Irish wooden pillars in which, per Morpheus Ravenna, “it was the practice to carve simple humanoid images into wood pillars…usually iconographic rather than life-like in style.”[2] I imagine those otherwise “crude” faces took on a rather different ritual character in firelight.

In contrast, electric lighting has been long established as, well, extending the day time (with all the attendant problems) rather than signaling alternative, magical time. Accordingly, candles provide us with a dramaturgical, ritual tool: the ability to simulate campfires and to provide us firelight, to give us light and light as well as to signal to ourselves in ritual that we are in alternative time. I’ve even had my altar “gods” animate in trance with candle-light, and that’s a harder thing to accomplish with LED lamps.