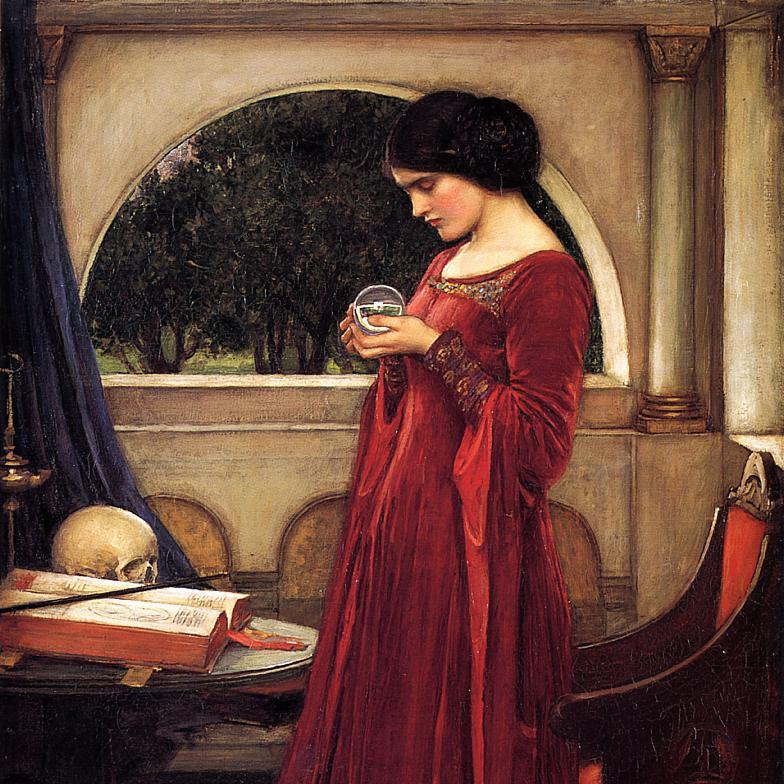 As I explore forms of magic and enchantment that would’ve been well outside my wheelhouse, well outside my inclination many years ago—I have a pile of grimoires that make a goodly amount of sense these days to me; I have various practical enchantmenty documents lying about on my hard drive or bookshelves; I have my ugly Table of Practice/Art and the silvered basin I stumbled upon yesterday; I have a mullein, vervain, cinnamon, honey, and Mugwort-infused wine I’m drinking now that it’s time that I was told, “Hey, yeah, drink this for me.”—well, I find myself recognizing several things.

Firstly, I have always been rather sensitive, but I have routinely closed myself off from those senses, or I’ve allowed other things to distract me into being closed-off or gnawing on my own tail.

Secondly, I know quite a lot already, and if I shut up and listen to myself, I know even more. Part of this second point is that my unconscious and deeper Crowess knows stuff I overthink or get too busy egoically to recognize, but also, there’s the matter of just letting my intuition let me know what’s right or wrong.

Thirdly, many forms of magic work—or at least do something—even if you aren’t seeing it. I’ve grown increasingly averse to the usual energy paradigms since 2014 even as, yes, “energy” is a thing, does something, but it’s too easy to think that you’re slinging flashing bright visualizations of electricity or light or have to grunt so hard in order to do anything.

I think as someone suggested, that ain’t the Dao at all.

One of my challenges right now is bringing these three strands together, integrating the practice with my intuition. The Solomonic (and off-book Solomonic) system has demonstrated enough validity for me to change many of my old opinions, especially with better context and authenticity than the Edwardian-derived stuff I’d seen for years had led me to believe. (Seriously, I would recommend the Rune Soup Premium Membership and courses.) I can conjure up a presence—I can take existing rituals in a grimoire or elsewhere and I can very much feel the presence of whatever I’m trying to get at. What I make of that presence remains problematic, though.

I have to admit that conjuration in particular—that is, spirit conjuring and contact, especially of beings I hadn’t already ran into—had generated quite a bit of anxiety for me early on. In hindsight—and especially as I was trying to unpack these feelings early on—it really seemed like I was trying to talk myself out of conjuration, through all sorts of excuses. Fucking demons. Agency and free will and spiritual biopolitics. Too much complexity. Not INTIMATE enough. Too much crap to assemble and deal with. Honestly, I was just looking for excuses, finding excuses. Despite my own pretensions and beliefs otherwise, I had a fear of something OTHER and uncanny being in my space or near me. Looking up, over at the corner, and seeing some weird being just waiting there. That kind of horror movie bullshit.

I will tell you that, as I sat cramped trying to conjure up a treasure hunting spirit whose conjuring was pretty damn lean on requirements—well, 90 minutes of that, and I was like, “Fuck my anxiety, this fucker better show up now.”

I have compiled a little binder of rituals and notes, etc. I have my tools—less or more—and I can get that presence. (The most recent one was rather intense, but pleasantly so. Very interestingly so.) However, I find myself having a hard time going through the ritual script and keeping my intuitive faculties open. Part of this, I suspect, is a matter of practice and getting used to linking the mechanics of ritual with the clairvoyant or sensitive faculties I know I have. And, on reflection, that’s a rather Magic 101 problem to have.

One of my problematic modalities may be space: when I’m working within an actual circle and not just an etheric one, I am constrained in space. I can move and sway and pace and gesture—I can perform—outside of the circle, but I have limited architectural space to set up my about three-foot circle. So I spin in place, or I’m sitting down, and I’m wary of flinging myself out of the circle (and maybe over some candles).

So I haven’t figured out how to perform and create my faërien theater to my satisfaction yet.

Also, I am consistently disappointed how much light ten candles produce, and I am wondering if investing in some mood lighting to supplement my candlelight may be an idea.

Anyway, I have my practical enchantment—I just launched modest shoal of sigils just now, and I have more coming this week. I am also planning on several other acts of enchantment and prep over the next week. I have some anointing oil infusing. I have found that my intellectual and cognitive enchantments—learn about X; understand Y; master Z—work well enough. My physical results that I’d like have been less successful, but I’m probably aiming at probabilities that aren’t as easily nudged than the mental stuff, so that’s target selection.

And I want to write some poetry for someone—and my dreams have at least been pleasantly less banal. I hate banal dreams.

Featured Image: John William Waterhouse, The Crystal Ball (1902). Here, have a different JWW painting than the usual Stunner-doing-magic-stuff you see.