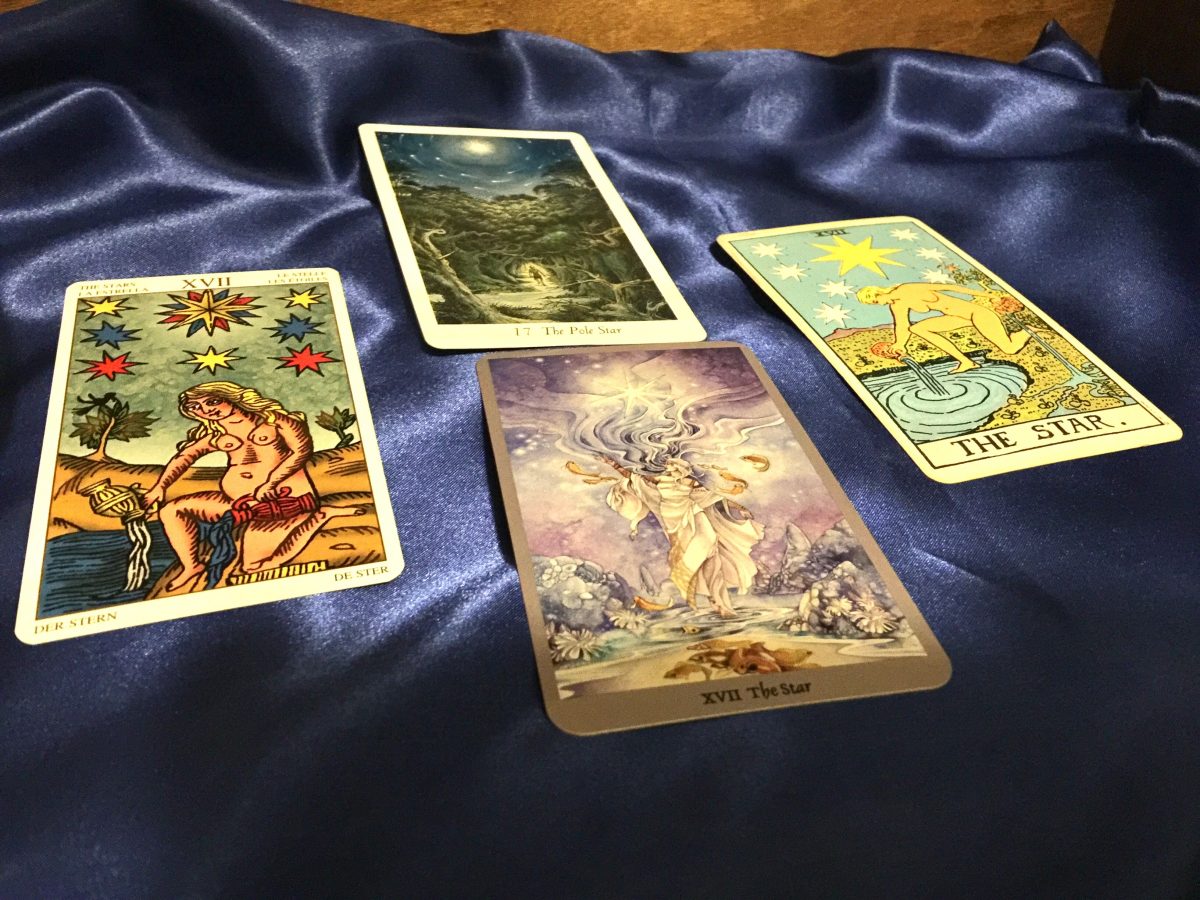 The One about Tarot & Divination

I’ve had tarot cards for a long time. I have a deck of Waite-Smith someone I knew a long while ago gifted me. I used to have a Herbal Tarot—there was a giant garlic bulb rising before the Tower[1]—but it vanished at some point. I have a Shadowscape Tarot, and I have my Tarot de Marseilles deck. I also have a Wild Wood tarot gifted to me by La Maga Tarot. To be truthful, I’ve often been sporadic in using any of them. For a long time, I would have a bunch of candles going, specs off, sitting on the floor in the candlelight and trying to read the cards.

The Shadowscape is hard to do that with: its art is more densely detailed and lower contrast than the otherwise cartoonish decks I also have. As much as I dig the Shadowscape, I sometimes have to hold the cards real close to see what’s on them.

My tarot practice was also haphazard and half-assed. I felt too cool for spreads, so I would do two or three-card “spreads.” (They’re still spreads, but simple ones.) I wasn’t really connecting with tarot other than as a general sort of self-exploratory basis. The TdM seemed very expressive when I first tried it, and I’ve used it as an adjunct to some sigil magic. I was routinely drawing the top of the Waite-Smith during some daily alignment practices for a quick visualization: visualize myself into the card. And as I was working on sigil magic, I also would ask my “higher mind” to draw the right card—and I’d let the flash come through as I flipped out whatever card felt “right,” and that was often eerily, well, right.

All that said, I was half-assing my divination. I think I blamed the messiness of the tarot symbolism for what I was supposedly wanting to do.

I had the impulse to get a reading from someone else and settled on La Maga Tarot, and the reading was apt and right to the point that I felt moved to reconsider my perspective.

On reflection, I’d been doubting divination.

You see, it’s like astrology: I’d seen enough to recognize that shit could work in the right folks’ hands, and even I’d been able to make enough sense of my natal chart to glimpse its potential. I spent a lot of time trying to find my way to an understanding of astrology that gelled in my mind, to where I could get a sense of the shape of how it worked.

I’d done something similar with tarot and divination in general. I believe I’d settled on a kind of correlative principle: the patterns of a shuffled deck could reflect larger patterns in the cosmos. That’s a starting point: it’s a version of microcosm:macrocosm. And there are all sorts of corollary models that I can smoosh together in my head, but I would probably point to the following: the deck and symbol set as prosthetic and processing array for my own unconscious awareness and that of other spirits, including the spirit of the deck. That is, the deck’s a way to off-load some of the processing of sensation and experience and communication, much as a book is a way to off-load the handling of memory and rhetoric and experience. I’m specifically resisting a tool or instrumental logic here, though it’s implied in prosthetic; instead, I want to favor something more integrative. I interweave conscious and unconscious, deck and spirits and cosmos, and what I’m getting at and my understanding of that is in the in-between of all that.

Tangent: In comparison, long ago, I had worked with the I Ching, but I only vaguely recall my experiences there. I’ve recently experimented with geomancy with what I consider very good results, but I’m not beyond the point where I have to consult a list of the figures yet. (I have two now-consecrated six-sided dice—2d6—that I use to generate evens and odds for generating figures and mothers.) In my experience with geomancy, though, I would say it explicitly relies on spirit communication—mind you, I will draw up the planetary seals and get that going. That said, the binary nature of these divinatory modes points towards some deeper spiritual mechanism—or a deeper weaving of spirits into causality. (At the same time, geomancy and astrology seem like chthonic:celestial mirrors of each other, in many ways.) As a geomantic newb, I would have to agree with others that geomancy is good for concrete answers when you want them. (But I’m gonna have to play with some playing card cartomancy at some point.)

That said, tarot offers a different modality that strikes me as “richer” and more aesthetic, more theatrical, more atmospheric. And in that sense, different decks entail different symbol sets, props, costuming, nuancing that lend themselves to different specialized tasks. For me, Waite-Smith has proved the divine-all, adept for all kinds of queries. I’ve used it for getting a sense of where to take different spirit contacts (How ‘bout this guy? Meh. This guy? Okay, yeah, let’s talk to him next.) and for lots of current life probability and timeline exploring. I use the Shadowscape for my internal stuff—getting at my Depths and into dialogue with them. The Wild Wood has proven interesting and evocative for spirit communication. I’ve sorta withdrawn from the TdM of late, mostly because there’s a steeper curve there for the pip cards.

Meanwhile, what truly got me taroting again was the freaking Celtic Cross. I mentioned earlier I got snobby about spreads a long time ago. Bah—I don’t need a structure to do things. I will pluck it from the aethyr. After hearing about the Cross multiple times lately, I decided to get a reference at hand and tried my hand at a Celtic Cross spread for the first time in decades.

Then I did another. And another. It was amazing to me how suddenly responsive all the decks were, even how clear they were. I had developed a back-of-my-head sense about spreads a while back after reading some of Mist and Ether’s posts about spreads—the idea of spreads as cartography, as a spatial mapping of probability, realities, etc. resonated in my head, especially after I’d spent months staring at skies and pondering directionality and the “shapes” of “ideas.”

But, yeah, I was sitting at my desk last night, rum-and-cheap-diet-soda at hand, and the Waite-Smith as we did a string of spreads on several topics, especially for navigating the near 2017 future (and some broader “climate forecasting”).

Finally, here’s a fun one: do a Celtic Cross on “What questions should I be asking?” Each card points to a question that you’re probably avoiding or not noticing. That was…”fun.”

[1] My friends of long ago would ALWAYS mock this card. I couldn’t really blame them per se.