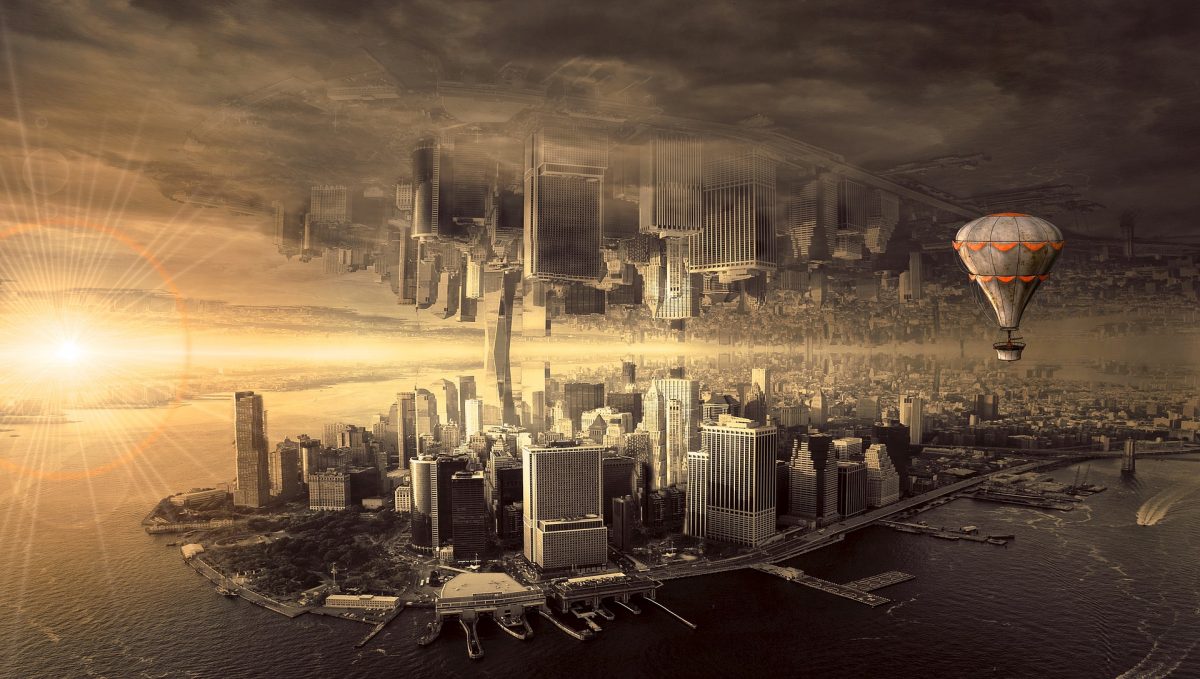 So, in Eduardo Kohn’s How Forests Think, he articulates his understanding of the dream logic of the Runa natives he spent time with as an anthropologist. Kohn observes that “Literal communication takes place when one being can entertain the subjective viewpoint of the other.” For “lower” beings to communicate with “higher” beings—or presumably for beings who lack familiarity with the “subjective viewpoint of the other,” communication can only occur “through metaphor…through an idiom that establishes connections at the same time that it differentiates.” Humans perceive the forest as wild, but the spirit “animal masters” perceive the forest as their “domestic gardens and fallows.” In a similar manner, human dreams tend to be metaphoric because humans lack the frame of reference to make literal sense of the dream/spirit world. Humans and their dogs can learn to share an “affective field”—a shared frame of reference in which their respective differences in species can be, temporarily, bridged through Kohn’s sense of the language of the forest. Humans and dogs—and with entheogens, humans and even more—can entangle themselves in order to bridge the metaphoric gap.[1]

In a sense, we might understand Kohn’s argument here in the broader sense of human experience in that we lack familiarity with the Unconscious or Dreaming world, in general, including what we might call the Otherworlds. Spirit contact can be weird and synchronistic and symbolic because both humans and spirits are having to determine how to communicate from radically different frames of reference and, as I’m about to get into, value systems. For example, Kohn points to the Runa Puma:

Settling down to sleep under our hunting camp’s thatch lean-to in the foothills of Sumaco Volcano, Juanicu warned me, “Sleep faceup! If a jaguar comes he’ll see you can look back at him and he won’t bother you. If you sleep facedown he’ll think you’re aicha [prey; lit. “meat” in Quichua] and he’ll attack. If, Juanicu was saying, a jaguar sees you as being capable of looking back—a self like himself, a you—he’ll leave you alone…How other kinds of beings see us matters. That other kinds of beings see us changes things.[2]

That said, if you can acclimatize or familiarize yourself with another self to where you can share a frame of reference with them, then you can communicate in far more “literal” terms. If you’ve established a rapport with a spirit and can communicate well, then congratulations, you’ve managed something special there. I would imagine this task is easier with those spirits who were once human themselves, who still retain vestiges of our mortal and even cultural frame of reference. Otherwise, you have to resort to symbolism, feelings, and metaphor.

Amongst other things, I’m reading Carl Jung’s The Red Book, and I’m into Liber Secundus and come to his active imagination sessions “The Anchorite” and “Dies II.” In these sessions, Jung encounters a person he calls Ammonius who spends his time in a desert hermitage with a book of gospels that the anchorite has read over and over again. Jung’s imaginal persona wonders at how tedius such an enterprise must be, given how long Ammonius has been in the desert, but Ammonius rebukes Jung:

How childishly you speak! Surely you know that one can read a book many times—perhaps you almost know it by heart, and nevertheless it can be that, when you look again at the lines before you, certain things appear new or even new thoughts occur to you that you did not have before. Every word can work productively in your spirit. And finally if you have once left the book for a week and you take it up again after your spirit has experienced various different changes, then a number of things will dawn on you.[3]

I would argue that Ammonius exposes Jung to Derridean theory a few decades before Derrida will get to work, and Jung has to confront the mutability of language—that all words, all texts, can mean everything. There is an anxiety in this line of thought that emerges in these sessions, though, that if words can mean everything or anything, then they also mean nothing.

However, at that point, I wonder if Jung and we veer from hermeneutics—interpretation of meaning—and into axiology, or the philosophy of value, and by extension a study of commodification. It is as if the potential for indefinite or even just more meanings (or more meaning?) devalues any particular meaning.

I find myself resistant to such a sentiment, though. Those other meanings remain real. They retain whatever significance they had as meanings. The fact that other meanings can easily emerge strikes me as an occasion of joy, of exaltation, of potentiality and the joys of chaos—or as one mentor put it, “a hermeneutics of joy.”[4]

After “Dies II,” Jung then confronts death and mortality, and he posits the (perhaps now common) idea of how “Without death, life would be meaningless.” But here meaning is value, not meaning. Life and death he treats as binaries and negations (and dualism seems premised on axiology, amongst other things). Consider the following:

Joy at the smallest of things comes to you only when you have accepted death. But if you look out greedily for all that you could still live, then nothing is great enough for your pleasure, and the smallest things that continue to surround you are no longer a joy. Therefore I behold death, since it teaches me how to live.

If you accept death, it is altogether like a frosty night and an anxious misgiving, but a frosty night in a vineyard full of sweet grapes. You will soon take pleasure in your wealth. Death ripens. One needs death to be able to harvest the fruit. Without death, life would be meaningless, since the long-lasting rises again and denies its own meaning. To be, and to enjoy your being, you need death, and limitation enables you to fulfill your being.[5] (emphases added)

That is, death represents an ultimate negation of everything in life so that even the smallest of joys in life become fantastic wealth when placed in comparison to the utter privation that death represents.

I want to put Jung into dialogue with Kohn now. We seem to be confronting a crisis in metaphor (and therefore meaning) and in how we use metaphor to bridge worlds. I want to buck against this commonplace notion that life and death are binary opposites and negations of the other. Instead, we might consider them modes of becoming. We might point to birth & death more appropriately than life and death (life and after-life might be more accurate?). Let’s consider birth and death as gates as some historical moments did, doors through which everything passes from one mode of becoming to another—even the sun, moon, stars.

Does our typical perception and negotiation of other modes of becoming or frames of reference, if metaphorical as Kohn suggests, emphasize the comparative role of metaphor, especially from a mind set that conceives their relation in terms of value. The living look at the dead or im-mortal as lacking the cultural, economic, or other things valued here, and in doing so, we imagine barren wastelands of the Underworld and Lands of the Dead, and I suspect something similar happens in the other direction, too. So, we perceive the passage into death as privation, as lack, and in doing so, we wind up clinging to the valued things and relationships here and paint what lies beyond death (or even in the Otherworld) as a poverty of mortally-valued things, which is true enough perhaps.

I have to wonder, though, how much of that death fear, that fear of mortal privation, is bound into archonic control systems, the greed and selfishness that people always have for what they’re familiar with? What happens, though, if you work at bridging your life here with your life there? What happens when you work at getting a handle on what you want, when what counts as you includes not only your incarnate life here but also the life you start living (or are already living) there?

I suppose my bigger question is, how much is the fear of death—other than a natural response to the cessation of biological activity and leaving people you care about “behind” (maybe?)—a failure in our ability to negotiate the metaphorical divide between an existence we have literal knowledge of and an existence for which we normally lack concrete familiarity?

These questions put me in mind as well of “Kingdom of Heaven” discourse and the “value”–often quite affluent!–associated with virtuous afterlives in relation to the value of this life—even Jung points to this devaluation of this world and its life:

For if the wretchedness and poverty of this life ends, another life begins in what is opposed to me. This is opposed to such an extent that I cannot conceive it.[6] (Emphases added)

Jung’s response—and I suspect many of these value-driven responses—emerge from a disenchanted worldview in which this world is rubbish, and I can’t help but think of control systems that defer the hope for a better or enchanted reality to some nebulous after-life. What happens, I would finally ask, if both those realities are one and the same, even if different modes of existence, and not a dualistic exercise in value and commodity?

[1] Most immediately, I’m pointing to Eduardo Kohn, How Forests Think: Toward an Anthropology Beyond the Human (Berkeley: University of California Press, 2013), 149-50. Raven-headress-tip to Gordon White at Rune Soup for first pointing to Kohn—and doing so often recently.