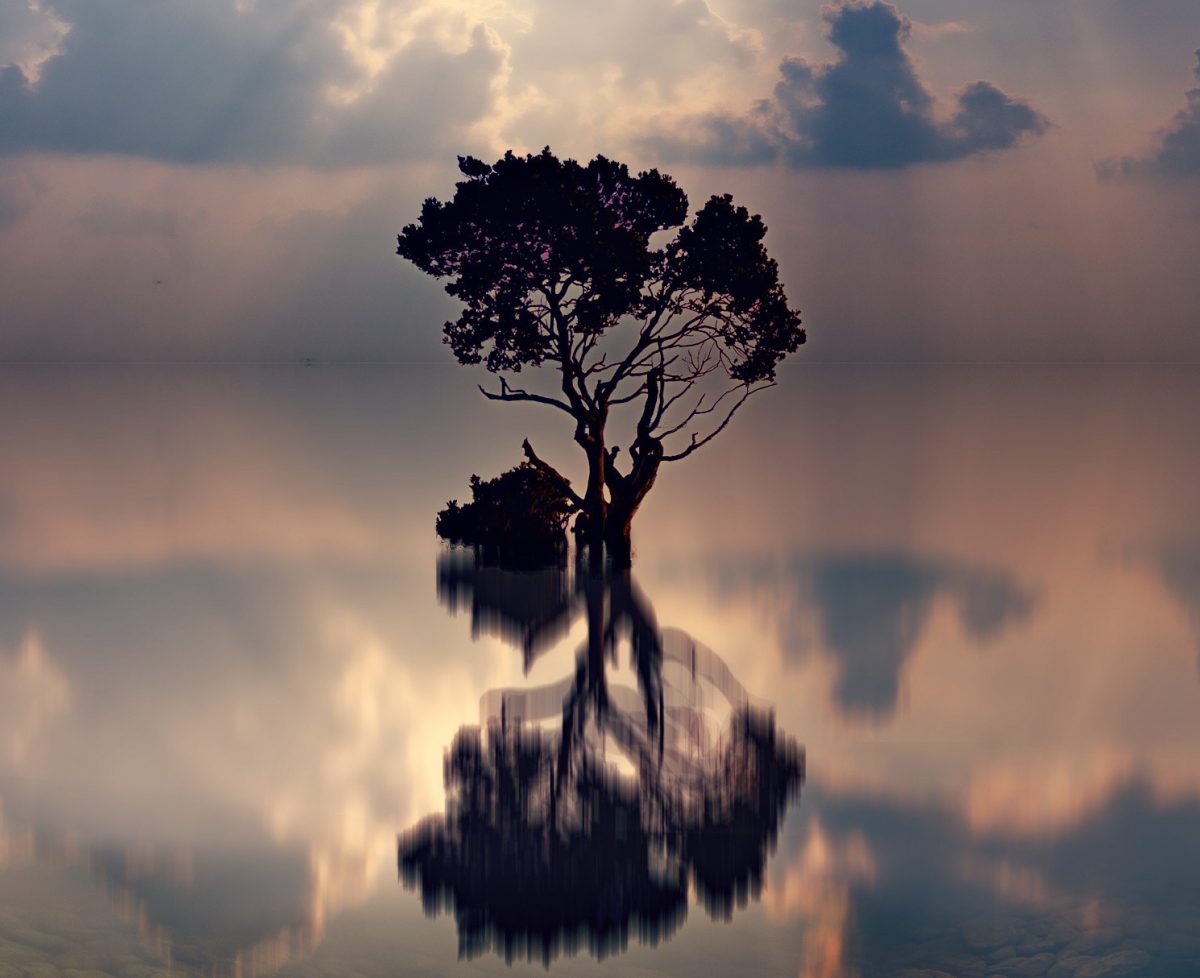 In this post, I’m going to begin by offering a gloss on anthropologist (and late career near-philosopher) Tim Ingold’s The Life of Lines.[1] In this text, Ingold comes at the world in terms of lines—focused on becoming—rather than what he calls “blobs” and object-oriented perspectives of the world—focused on being. From there, I’ll share with you some of my perspectives on how lining aligns with offerings in magical and religious practice.

Ingold invites readers to consider his alternative to object-oriented modes of philosophy and the materialist turn that has spurred a cultural materialism that has been in fashion for quite a while. This object-oriented philosophy conceives of the world in terms of things, “blobs” as Ingold terms them. Such a perspective has its appeal as it putatively offers &#8220;objective&#8221; (a separate object-ive) observer the ability to assess, evaluate, perceive something as a whole or as itself alone.

For example, we might examine a piece of pottery as a particular blob, and by examining its characteristics and object-ness, we can assess it and then project what’s learned from the pottery onto the culture that produced it. We can also apply this kind of thinking with other things, including far more abstract objects. We could consider a person at a point in time as a discrete being, in isolation. We could do the same for a culture, an idea, a place, and more. From this perspective, the world is full of “blobs” for scrutiny—even we become blobs to be studied from outside, like gazing through a microscope or telescope at discrete objects in the distance.

Ingold argues that this approach results in a static, dead universe. Blobs are static, unmoving, dead. He points to various attempted solves for this problem: after all, the world continues on, changes, and beings live. As Ingold describes these attempted solves for the problem, he relies on his extended metaphor of lines and blobs. Some solutions have some blobs send out lines that ultimately end, perhaps reblobbing again in death (see Figure 1).

In my own academic preparation, which wound up being very Foucauldian, I encountered something like these solves through Foucault. He gets at a similar idea in his distinction between synchronic and diachronic perspectives. Diachronic was the traditional, narrative-driven, changing-over-time way of thinking with the world. The cultural materialist turn demonized such a perspective, and to be fair, English studies had relied on this approach to root themselves in what was more biographical studies of authors and Great Men approaches to literary history. Synchronic perspectives entailed examining texts and cultures at fixed, static moments in time, as if one had sliced a cultural moment off and stuck it on a microscope slide to examine it. Then, the tangibles&#8211;the cultural material artifacts and stories&#8211;would be examined in order to tell New Historicist or Cultural Materialist accounts of and readings of texts and peoples. The synchronic perspective was used to then tell very slanted stories (diachronic again) about the material conditions of the text and its contexts.

Instead of a world of blobs, Ingold argues for a world of lines. Nor are these lines neat ordered lines: they are weaving, knotting, overlapping lines, more serpentine, spirals, crawling roots than straight lines. Consider Figure 2. We could see a particular person as the black line, emerging from the intersection of two parents (orange and green). Those parental lines in turn emerged from the intersections of other lines. (I’ve kept the black line continuing to the left—as if from an earlier point in its line—to gesture to the continuity of consciousness before and after life.)

However, Figure 2 can also suggest far more in terms of lining than seemingly immediate causes. On a personal, human level, the lines that intersect, knot, and weave together with ours can be explicitly spiritual (ancestors and more), cultural (class, politics, ideology, pottery, art, toys), hierarchical, place (lines through space), plants, animals, wind, dietary, pets, temporal (lines through time), and more. Even “objects” have lines, from their “origins” in the world (stone, ore, wood, and more) through their intersection with artisans to owners/users to the afterlife of objects.

Within our visible, human world, we can’t really go up and down the lines other than through our normal experience of time and space: we can’t go back in time along a line, cannot revisit some earlier point on the line, except through our imagination. Note, I&#8217;m not discounting such imaginative acts. To try to force a line back into some earlier state, at least in the human experience of the world, would be to break the line. However, one approach we can take is to consider that ideas have lines, the imaginal has lines. Actually, there are lines from the imaginal through our visible world and into our lives-as-lines and back again. So, for example, we can align our imaginations/thoughts in the present with the line of an idea and weave together with some point along that “earlier” line.

In a similar manner, I can &#8220;connect with&#8221; another human by the stories we tell of our pasts, in which case, we entwine together visibly and physically in the present moment, but the lines of our stories and ideas of our selves also entwine together.

Ingold’s thinking winds up being rather magic- or perhaps spirit-adjacent. He skirts going quite there&#8211;he is a career academic, after all&#8211;but he definitely seems aware that, professionally, he probably wants to avoid considering those more-than-human implications of lining. After all, if lines live, and if everything is lines, then everything is thus alive. Ingold tries to qualify his thinking in that most everything are lines. He’s still an academic writing an academic text (and you can tell), so the Life of Lines needs haunting and magic-ing up. Or, to borrow from Ingold&#8217;s disciplinary colleague Jack Hunter, it needs to be ontologically flooded:

…what I am suggesting is an approach that is, in many ways, the opposite of the traditional bracketing approaches. Rather than bracketing out questions of ontology for fear that they might lead to truths (‘damned facts’ in Fort’s terminology) that cannot, by their very nature, fit into the established order of Western academia’s dominant ontology, I suggest that we essentially open the flood gates of ontological possibilities. This places all ontologies on an equal footing, so that while ontological bracketing protects and reinforces the mainstream ‘consensus reality,’ what we might call ontological flooding destabilises it, and opens it up to questioning, exploration and expansion—in essence such an approach places different ontological systems on an equally questionable footing.[2]

So, whereas Ingold avoids considering the ontologically messier lines of the world—or the academically unpalatable ontologies—like spirits, the interiority of matter, life before and after death, and so on, Hunter argues that we should go ahead and include such ideas and see what thoughts we can think with them.

The Life-Lines of Offerings

I recently did a Hekate ritual adapted from PGM IV.2708-84. Rather than the date rapey spell the original is, I adapted it for other intentions. I noted that the following spell, PGM IV.2785-2890, also to Hekate, pointed to offerings for “doing good” as well as “doing harm.&#8221; The harmful materia in that spell overlapped with the first spell’s listed materia, which made sense for a date rape spell. Since I was “doing good,” I used those materia instead from the second spell. These include sage, frankincense, myrrh, storax[3], and a fruit pit. I chose an apt time, lunar day 14 (just before the full moon), opting for the very nice lunation just after the eclipse season of this summer finally finished.

For the fruit pit, I used a peach pit, from a peach I had eaten. During the rite, I got an excellent response, and I settled in to sit-with Hekate for a time. She decided to show me something. Unburdened by the flow of time and space like I was at the time, Hekate seemed to reach out to another point along the peach pit’s (time-)line, as I saw her standing beneath a peach tree.[4] She reached up, quite deliberately, looking at me, and she took a peach and began eating it. Or, perhaps, I was seeing a possible tree that could grow from the peach pit and a possible peach—I eventually left the pit itself at a triple crossroads, so, who knows? Or, perhaps, she reached back through that pit to some ancestor tree or some descendant tree or some cousin tree, and she took a peach. Or, perhaps, she shared the peach I myself had eaten.

She dd it so deliberately, as if she were making a very definite point, and this experience has had me consider the nature of offerings within an Ingoldian perspective. That peach, and its line—including the orchard it grew from and more—has now entwined with Hekate. Or, maybe that peach line re-entwined with her—maybe she’d been offered a peach from the line before—but now I am also entwined with her and that line. From one perspective (hers?), that peach and its line is “hers”—or was &#8220;destined,&#8221; as Gordon White suggested in a Rune Soup Live Q&A, to entwine with her. And I hadn’t just eaten the peach, at that point: I had woven myself partly from that peach I had eaten, and its line, and I had woven her and I together, too.

I had a similar experience a few days ago, on the feast day of Sts. Cyprian and Justina of Antioch. I found myself at one point, in a vision, there on a shore with the two saints as we ate from the feast I had prepared and dedicated to them, and the other offerings I had made. It was a happy, joyous moment of communion through food, through offerings, even as St. Cyprian was speaking quite casually—though I couldn’t hear what he was saying at the time.

And today, as I do some angelic work here for the Feast of the Archangels, I gathered flowers from the neighborhood—now the lines of the wildflowers and the “weeds” of the archangels. I would ask the plants, “May I take a flower to give to the archangels?” And, well, the plants seemed quite down with this arrangement. I would be lining, weaving those “weeds” from the country where I live with Michael, Gabriel, Raphael, and Uriel. The plants considered this choice a definite elevation. Ultimately, it was as if the flowers unfurled on the altar into a garden of wildflowers and “weeds” with the Four amongst them.

Offerings can become, then, a way to weave us together with others, with the more-than-human. Offerings are not necessarily “payment,” but when we weave and line together, there probably is still a trans-actional exchange, the very act of coming together with others and what I bring and what they bring. However, I am now lined together with those flowers—and archangels. I have dined with Hekate and saints. Nor are these end-points: we will continue lining together and with others. After all, the soil, fungi, microbes, trees, and other species and pollinators who together wove peach trees are now entangled with Hekate—and me—and now with saints and archangels. Or, really, we already were, but the offerings provide a way to refresh, reassert, and revivify these lines so they can continue living and moving and becoming whatever we will become next.

[1] Tim Ingold, The Life of Lines (New York: Routledge, 2015). Gordon White first pointed me to Ingold, and indeed, he told me to read the book so I could badger him with my really long questions about it on the Rune Soup Live Q&A.

[3] I had to track down storax (learning of the distinction between it and styrax/benzoin), meaning I had to use a charcoal incense burning for the first time. That turned out well enough.

[4] I am indebted in part to Gordon White for a few notions that came forth from sharing this experience with him in a Live Q&A, specifically whether or not the peach (line?) had been destined for Hekate.