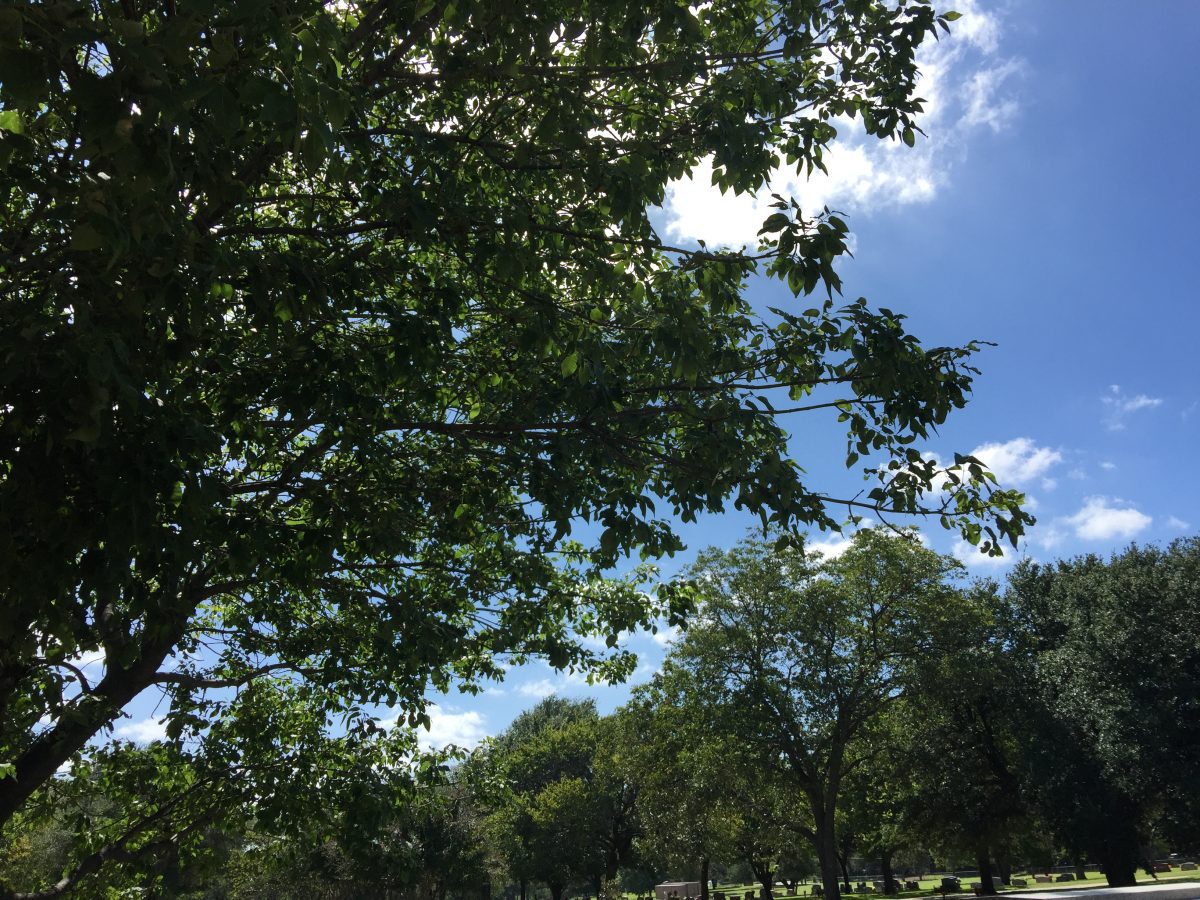 My grandmother died back in 2004. I was poor, lived elsewhere in the state, wasn’t even in grad school yet. I also didn’t do the funeral at the time because the family drama between her sons and daughters was intense and stupid and infuriating.

It’s her house that I’ve dreamt of often over the years, and I’ve had intense ancestral stuff happen through the imaginal-side of the place. When I was first pondering starting an ancestral practice, it was she who started popping up in my thoughts, as if to say, “Yes! C’mon! I’m right here!”

She’s buried at a cemetery not far from that house and not far—indeed, it’s almost literally down the road—from where I live now. I’ve written before about my experience of this place—even as I’ve never set foot in it. I’ve dreamt of this cemetery and walked in its imaginal aspect far more than I’ve walked upon its earth and manicured lawns, under its shade trees.

To be honest, the dreams freaked me out. In those dreams, I saw the place as like a flea market (or a trash and treasure market or a jumble sale), with a couple of folks running tables at the entry and then rows of old-style radio and television cabinets, old computers from the ‘80s and ‘90s, and more. As I’d pass these antiques, they’d light up—I’d hear voices, soft cries, the occasional plea or a growl, or static. The computers would light up and try to show me old newspaper clippings. I’m not sure what’s worse: a disembodied voice, static, or disembodied information. The deeper I went, it seemed to shift from being indoors to outdoors, and I’d pass by stranger displays. I remember a burning red playing card king in plasticine standing 7-feet tall, with a buzzing sound that got louder the closer I got. And, further away, I saw a fenced off area that seemed overgrown, with thrones sitting in the tall grass, and I had the sense that if I got too close, then I’d die.

I went by the cemetery today.

Cemetery trees are their own kind of trees

I had a bunch of kit on me, some things I wanted to leave at my grandmother’s grave, and a couple of older prayers for the dead at hand. As a cemetery newb, I first thought, “I’ll try wandering and looking,” and I quickly abandoned that notion for locating my grandmother’s grave. With the heat index, it felt like 90°F/32°C. So, I sucked it up, and I went into the main building.

As I sat waiting for the man in the front office to look up the information I’d asked about—my grandparents’ grave locations—I had the sense that I’d been here before. A group of folks—I suspect from the Our Lady of Fatima Church (heavily renovated from an old supermarket my family used to shop at when I was far younger)—arrived and headed deeper into the funeral home, and their path reminded me of one of the few times I’d been at a funeral home. My grandfather—the same I’d asked about in addition to my grandmother—had died when I was young, and I hadn’t been trusted to be at the funeral or graveside, but I was allowed to go into the visitation area. I had the strong sense of standing in the front parlor with its affectations of “Wealthy Baptist Estate” that I’d been there once over 30 years ago to see my dead grandfather.

Afterwards, as I walked deep into the cemetery, it occurred to me that the man I’d spoken with—indeed, also a woman I’d seen in passing—looked familiar. As I was drafting this post, I realized they reminded me of the people running the tables at the flea market in my dreams. This cemetery is active and a business, a large cemetery and the oldest in the city, and I laughed darkly about my perception of the flea market aspect of the place.

It was early afternoon, and the cemetery was mostly quiet, mostly hot and sunny. I probably moved faster than I needed to, but cemetery nerves and a sense that I’d just got hotter and hotter as the afternoon went on distracted me. I found my grandmother’s grave well enough—someone had arranged for the Official Flower Arrangement recently, and I have my suspicions who had done so. My grandmother’s birthday was last month, and she was one of those folks whose birthday and deathday are curiously close to each other. I spoke with her for a while, said some prayers, but I didn’t have much more to tell her that I hadn’t told my ancestral shrine the previous Saturday.

When she was alive, I knew her when she was an older woman with white hair. Shortly into my ancestral practice, she seemed to grow younger in my perception, seeming almost like an errant child. Today, she alternated a bit between a bit of a bright blonde female Peter Pan, my grandmother, and her as a blonde woman in the prime of her life. It was a light presence, but I also had a hard time relaxing much.

Her mausoleum was on the far side of the cemetery that I rarely see and which seems generally less dramatic. More peaceful. As I finished chatting with her, I looked eastward and felt I should probably wander that way. In part, I wanted to actually see if I could find that burning king and to see what the fenced-off throne section corresponded to. I’d seen and recognized what stood out as the fenced-off area months ago—a particular section of the cemetery in one corner. And I had a map with me now, and I also followed the rather large eagle that flew low over the grounds in that direction.

Along the way, I did some light trash and grave cleanup, as I noticed and thought I could tend to the problem—branches lying across grave markers, someone else with my grandmother’s family name that I brushed the dirt away from the given name (Lillie).

I found the burning king—a larger, older, more important-looking grave marker. I paid my respects and moved on.

I had seen on the map that the “fenced-off” area was a section set aside by the local Our Lady of Fatima Church. I approached the section today, and I stopped a little ways away. I had the sense that it was protected, watched, guarded. I paid my respects from a non-confrontational distance.

My relationship with death has always been distanced. However, in a real way, my relationship to this place is longstanding—I’ve dreamt of this area and that place for decades—and ancestry, the broader dead, country, and more seem to entwine together. And my visit was not dramatic—other than having those dreams wind up being validated in the visible world in many ways—it was also broad daylight on a Friday afternoon in early October.

I remember T Thorn Coyle saying that, sometimes, one of the challenges of being psychic is confronting and acknowledging that you are psychic, and instead of hiding from those implications—and the challenges that come with being psychic—you have to learn how to live with that reality. And while I’m of the opinion that most folks, if not all, are psychic—it’s a part of the human experience—I saw that, yeah, I had been dreaming of this place in very meaningful ways. I had also let my own squeamishness about the dead and about the implications of those dreams—all those voices and disembodied persons noticing my passage and reaching out, and me not knowing what to do or how much they might want from me—keep me away from this cemetery. I hadn’t “visited” my grandmother in the 14 years since her death.

Having walked there during the day now, I can see it here as midnight is approaching and far more clearly. It lies along a major thoroughfare that, in my dreams, I have also walked up and down often, always at night.

Looking out at said thoroughfare

When I was younger and starting out in magic, my sister and my best friend ran afoul of who were probably some of the spirits of place. I’ve mentioned to many people the spirit that rushed up to me in our backyard and growled audibly (and tactilely) in my ear. Mind you, I also was throwing around the odd LBRP and poking into things with all the grace of a mostly clueless 20-something who saw adversaries and “evil spirits” in the encounters that happened in the sprawling undeveloped street behind her house. It was also the ‘90s. I don’t know what responsibility I have to these persons. Indeed, I probably need to work on establishing and maintaining healthy boundaries, but I also have always felt like this area lacks anyone with my experiences, my relationships—such as they are—to these places. And yet, am I just trying to talk myself into playing “urban shaman”? Or, am I just realizing my neighborhood is far stranger and deeper than I had thought it was?