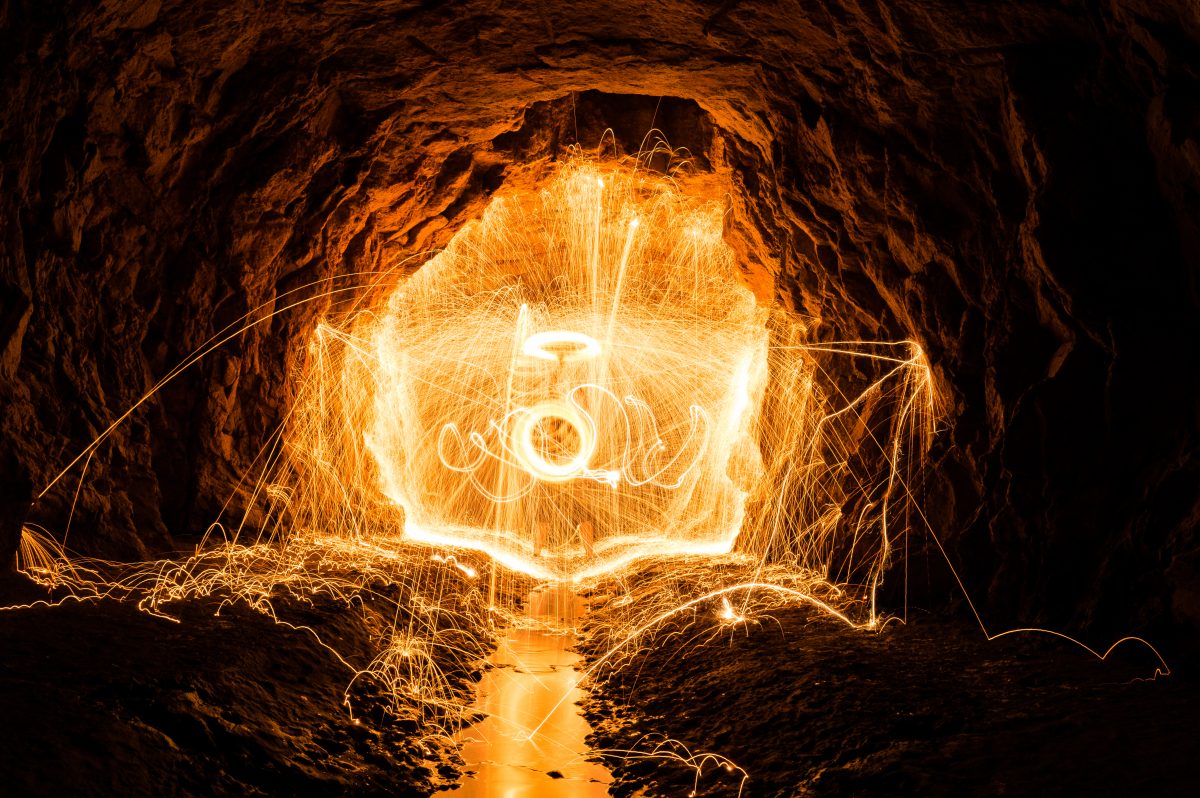 Jupiter is in Sagittarius, and Venus has stationed direct in Libra—two benefics in their domiciles. After the year of Saturn in Capricorn (he’s still there, moving with Saturnine velocity), Mars grinding down on Capricorn and Aquarius, and Venus Retrograde and all the other Retrogrades, it’s been instructive to me to play with Jupiter and Venus of late.

To be fair, I had wound up doing much to explore Venus Retrograde while she was in Scorpio. I could tell you that it was a Cloacina kind of time for me, or that I spent a bunch of time “working with” Venus in the Underworld—I had thought to do so at first, actually. Lots of “actual” journeying—lying back and trancey music in my ears, eyes closed—and all that. I can imagine how it might’ve gone without being as mindful as I was and trying to lean in to the resonances of the time: I imagine a lot of horrible stress, angst, and anguish. My wells run deep in Scorpio. I have plenty to angst over.

And yet, after a point, I found myself with wondrous new opportunities arising, hitching a ride with Venus (or Inanna or Ishtar or…) as she has now risen from the Underworld. I haven’t had the time to do as much as I’d like to do on certain fronts—I need more sleep and more dreaming and, well, more in general.

I did a lot of tedious grading in October and early November.

But much of what my “work” during the Retrograde wound up being was more play, reflection, con-versing. And as Jupiter in Sagittarius kicks off and as Venus in Libra resumes, I decided to try some planetary magic. I based these explorations in Kaitlin Coppock’s Sphere and Sundry guides to Jupiter and Venus in their domiciles. I had previously tried her Regulus operation, and, well, I&#8217;ve found myself pretty willing to see what she and Austin Coppock can lead me to, astrologically speaking.

Anyway, I wound up doing the Jupiter offering first, and although I didn’t have the time to do much with it afterwards—I had to rush off to do other things—I very much noted a distinct upwelling?—downdraft?—of Jupiterishness. I had a similar experience with my first Venus offering, too—and had to immediately rush off to do other things, as well, but not before I consecrated a couple of additions to my pouch o&#8217; magical stuff.

Now, for both these benefics, I had many of the associated materia on hand. For Jupiter, I had

Now, I’ve been doing “planetary magic” for a while now, but I might say instead that I’ve been doing more “planetary timing” for my magic. Yes, every shoal of Mercurial sigils I launch on a Wednesday with Hygromanteia timing invoked is planetary magic, and all magic is “talismanic” or “astrological” magic at some point—it’s all timed or mis-timed in some way.

But, I have to admit that Coppock’s guides I’ve valued as introductory dips into these pools from a new perspective, especially as that pool involves playing with materia for getting the spiritual forces of these benefics present. I have to admit that I have had a rather dull view of materia for a while, and though I had been remediating that perspective for quite some time, the upwelling of those planetary presences hit me with No, dummy, this is a thing. It’s one thing to intellectually know that: it’s another to know that.

So, I suppose I’m getting at a constellation of reflections about planetary magic, about my Retrograde experiences, about my growing holistic sense of where my nativity situates me, and about the ways to break the wheel, to step in with Fortuna at the wheel, and to otherwise free myself from my astrological fate. Because, well, while my nativity isn’t especially afflicted, while it’s rather wyrd in many ways, it’s not resulted in the life I want to live thus far.

It is, though, an interesting and wyrd “boot loader” for a different kind of life.

I didn’t watch She-Ra when I was younger—it was adjacent to me, age-wise, not quite on target at the time. I keep hearing about how there’s a reboot in the works, and I’m not sure I care.

However, I saw this fan art triptych cross my Twitter feed. And, it wasn’t until I enlarged the images—looked at them in order—that I was struck by them. Indeed, they spurred this post.

The first image is almost Saturnine to me—the black background, the sense of either contemplation or maybe even desperation. She is perhaps praying, whispering “For the honor of Greyskull.” But, she also feels tired, probably depressed, worn down. I’m admittedly projecting—using her as a mirror, if you will.

The second image—her eyes are open, and as her magical girl transformation happens, it’s almost as if she is aflame. She seems almost angry—smoldering anger starting to erupt into fire and light. It was at this point that I initially recognized that’s her sword she’s been holding—I have to admit I thought it was a lightsaber at first and that she’d been some Star Wars character.

The third image, though, was such a contrast for me. The fire has passed. The woman from the first image has been ignited, and all those things I said earlier—the fatigue, the depression, the wearing down, the quiet desperation—they’ve been burned away. There is bright light everywhere—she is shining forth in a bright place—and she is not enraged, not hulking out, not even angry anymore. She is composed. Confident. Present. Whole. She stands with power. And though she is “composed,” though she is not wrathful, she looks quite ready to move and act—with grace, power, authority, precision. Sprezzatura, even.

And, it resonated with me—this sequence—because I have glimpsed these states. I have lived the first. I have felt the growing, giddy, quite possibly malefic Queen of Chaos fire of the second—that second stage where—at points—you feel the promise beyond. You feel the angry call to action. The intensity and, yes, burning. It is almost as if, in straddling the first and third states, she burns with all of them.

I think it’s tempting to try to stay there—to ride that edge between who you are with that fire and anger and who you want to become—even as you’re neither at that point. It is energized, kindled, aggressive, assertive, and not a little bit mad. But, well, that stage is the fire that you will either burn yourself out with—it isn’t sustainable, and you will crash back into the first, or worse—or you will ride it into the third. And I can imagine chasing that second like a thrill, like a shot in the dark—or the arm.

But the third—oh god—I’ve glimpsed the third, too. For me, she’s been all too fleeting. She’s seemed too often a mirage or a trick of my thoughts. But I’ve been trying to make my way to her for a long time.

And, well, I can see how I’ve been that first woman, sitting in the dark, trying to gather kindling and trying to get sparks to catch. And sometimes, there’s smoke. Sometimes, a bright spark with the flash of the fire—no, not even the fire, but the hope of what the fire can bring.

I offer you this impromptu bit of art criticism not to talk up She-Ra, but to talk up where I see my magic leading me. I am busy trying to kindle myself, to get that fire going. That magic is practical—there are many things I want to accomplish in my life—and it is also practical in other ways. I want to conjure her forth. I want to be that Lady Aflame who will come forth by day. I cannot quite imagine what her life looks like yet—

—because my eyes, my senses have not adjusted to the light of her world and her life.

For years, when I was growing up, I dreamt of rooms or windows or mirrors through which I could see nothing but blinding light. For a while, I bought into the idea that I was looking into “limitless light,” into &#8220;formless light,&#8221; and similar ideas. But, when I found that light when I was not that far into my modern practice, I didn’t buy that kind of thinking anymore. I wanted to see what was also there—I was still there in that light. And, after a point, my “eyes” did adjust, and I found another world, or another way of seeing this world.

Often, I can experience that world, or that way of being in the world, in a muted or only “remembered” way. And then at other times, I can slide over, and I and the world blaze with light and color and wondrous wholeness.

And I find myself looking at where I’ve been led of late—Jupiter and Venus—new friends and choices—a deepening engagement with myself, enchantment, and the world—and I want to keep striking sparks.