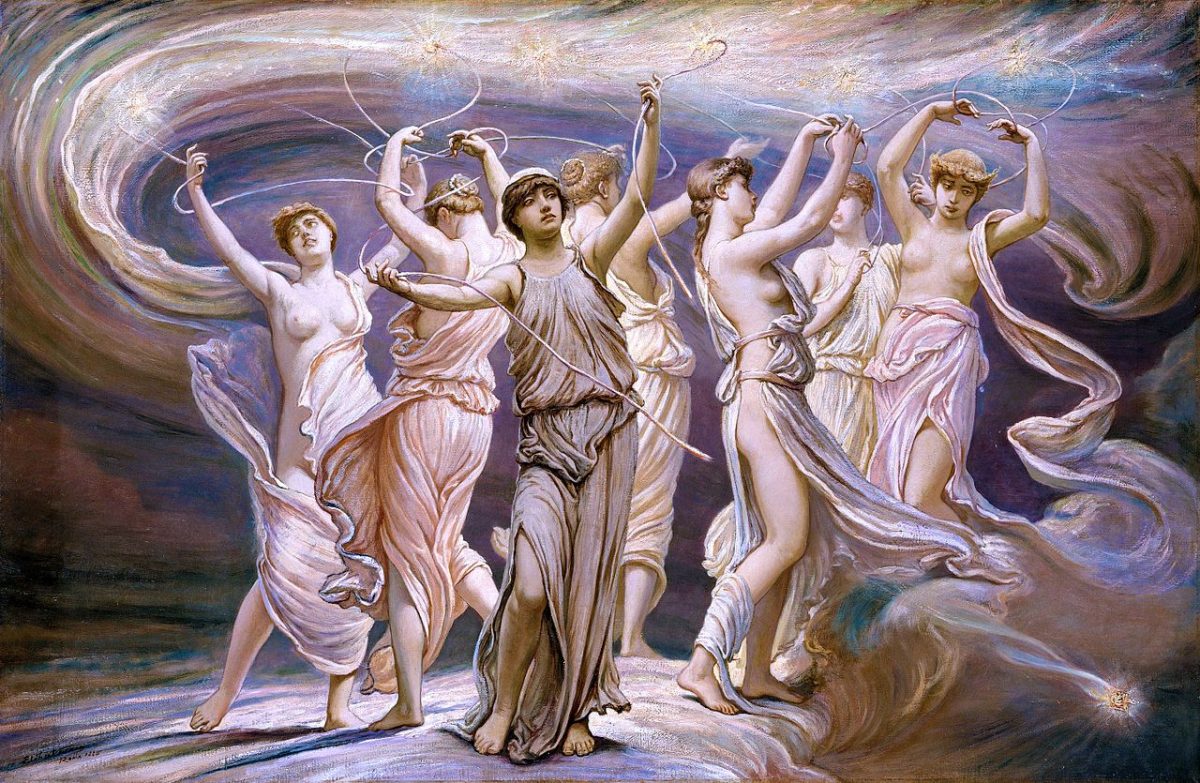 I was meditating a few weeks back and got a strong ping from the Pleiades, the Seven Sisters, and I’ve always had a fondness for the asterism. I always enjoy looking up and recognizing the Pleiades (and Orion). So, I decided I’d try my hand at calling up the Pleiades.

What do I mean by “calling up the Pleiades”? Essentially, I was going to get their attention, have some kind of temporary physical focus before me, and engage in a cross of scrying and visionary spirit contact work—sitting-down-“journey” work might be another way to describe it. I can get contact going that way while straight-up SCRYING is a skill needing more development on my part.

I wasn’t going for any kind of “binding,” per se. In a way, it was like, they got my attention, so I thought I’d try and see what kind of contact might result. That contact went very well for me, so I thought I’d share what I did if anyone’s interested in trying a hand at it themselves.

Because my cultural context for the Pleiades comes via classical sources, that’s the frame I decided to use for getting their attention. I had the sense to start with Orphic hymns, so I compiled a set of Orphics to get started—a sort of classically-inspired Pleiadean launch sequence:

I’ve linked to the Thomas Taylor hymns because they’re free and online, but I personally used Apostolos Athanassakis’s translation, which worked excellently. I considered the Hymn to the Night in there, but the timing wound up being late afternoon, so I skipped that Hymn.

Now, timing-wise, I decided to go for when the Pleiades were themselves rising, on the ascendant. Note, I was not fashioning a talisman, so I didn’t go with a rigorous election. I was doing something more akin to “opening a subspace channel” rather than trying to fashion a house for the Pleiades to live in with me.

Lacking the expensive and nice astrological apps, I went with the cheap-as-free astro.com extended chart selection (whole sign houses, of course). I wound up having to guesstimate and edit the event timing data until I found a time with the Pleiades rising with the Moon in a favorable aspect. Drawing on the Behenian star lore, I went with a Monday (day of the Moon).

Now, for the altar space, I found an image of the mythological Pleiades (the same as for this post), I got some fennel and some rock crystal. Indeed, I had seven crystals, treating seven as an important number for the Seven Sisters, with one serving as primary focus. (NB: I did place my crystals in sea salt before then doing a more ritualized but simple cleansing of any nasties hitching a ride with said crystals. Watch your materia hygiene.) I got a small ritual dish in which I placed the fennel, set a nice flat crystal stone atop the fennel, and I got some candles and frankincense going—all on a fresh white altar cloth. In the background, I wanted some appropriate music playing, and I found this track that I had on loop in the background:

In the hours leading up to the ritual, I noticed some definite ritual “bleed,” feeling rather spacey and airy, which was actually kinda relaxing for my ordinarily Saturnine disposition. When the time came, I launched into the ritual, marked the focus crystal with Agrippa’s glyph for the Pleiades using a silver paint pen. I then “sat with” the altar, “meditating” into the place I’d enchanted into being at that point in time. It wound up being a very insightful experience that opened up to some realizations that have proven fruitful to think with.

For my invocation, I modeled it on how planetary petitions from the Picatrix and many spells from the PGM seem to work. Here it is:

O Seven Sisters, Daughters of ATLAS, Ladies of Plenty, Companions of Virgin ARTEMIS—Sisters of KALYPSŌ, HYAS, the HYADES, HESPERIDES—NYSIADES, ATLANTIDES, DODONIDES—O signers of rain, who herald the sailor’s season—O MAIA, mountain MAIA of the lovely black eyes, ĒLEKTRĒ, amber, shining, TAYGETĒ, doe with golden horns, ALKYONĒ, king fisher, KELAINŌ, the Dark One, STEROPĒ, MEROPĒ, O Sisters who rush from the mighty ŌRIŌN, hear me. I call to you, O shining Seven Sisters, O Pleiades, come, speak with me, I call you, Pleiades, known to the Hawaiians as Makali’i, to the Maori as Matariki and Ngā mata o te ariki o Tāwhirimātea, or “the eyes of the god Tāwhirimātea”, to the Chinese as Mao, to the Indians as Krittika, to the Babylonians Mul-Mul, to Arabs as ath-thurayya, to the Egyptians as the Followers and Ennead, to the Japanese as Mutsuraboshi and Subaru—Come, Seven Sisters, come!

I mark this crystal with your sign: I dedicate, consecrate it yours: may it be portal from you to me, from me to you, O Seven Sisters. I ask your congress, for I have heard your call all my life. I have gazed at you with wonder and delight and longing. O Pleiades, come.

I did my best to pronounce all the names accurately, though I know I wasn’t perfect. I did look up the Greek names as well as I could and used the Doing Magic Voice I use when doing magical names from the PGM.

My resulting experience of the Pleiades was very much mediated by the contextual frame I used in calling them—as the Greek mythological Seven Sisters. And my experience was a combination of intuition and journeying with them to a particular place in the imaginal. The music probably helped, but I had the strong sense that they moved-with and as a song, that their passage through the cosmos was music. (I couldn’t help but think of the Songline of the Seven Sisters, as well.) And as much as they manifested to me in their attractive star-nymph aspects, I had the strong sense that there was far more just beyond and behind the immediate perspective I had. They are the Seven Sisters of Greek myth, plus more.

Anyway, I offer this ritual to you because it worked well for me and didn’t result in any explosions. I did offer a license to depart at the end, something simple:

Go if you must, stay if you will, and may the peace of IAO SABAOTH always be between us.

I am planning on doing more with the Sisters with a more rigorous election. As a note, I tried this general ritual format with Regulus, as well—Regulus also got my attention at around the same time that the Sisters did—but I think my timing wasn’t as good and wound up resulting in a far “muddier” signal. I want to try again on a different planetary day with better timing for Regulus. I would also say that my interaction with certain existing allies has demonstrated remarkable correlation in terms of signal and presence depending on when certain asterisms are rising, and I plan to experiment there more, too.

Note: I had nothing but good intentions and vibes from the Pleiades, and there was definitely a sense of invitation from them. I would definitely be far more rigorous in calling up star spirits with far more malefic reputations, like Algol.

Resources: I found Bernadette Brady’s Brady’s Book of Fixed Stars an absolute treasure for this kind of work. I also had plenty of inspiration from Kaitlin and Austin Coppock and Rune Soup. Kaitlin’s writings on Regulus and eclipses and more have helped me think with many of these ideas, and Austin’s first podcast with artificer Tony Mack also provided plenty of fuel for the experimental fires. Also, Austin and Gordon’s live episode and follow-up from So Below also proved very fruitful.