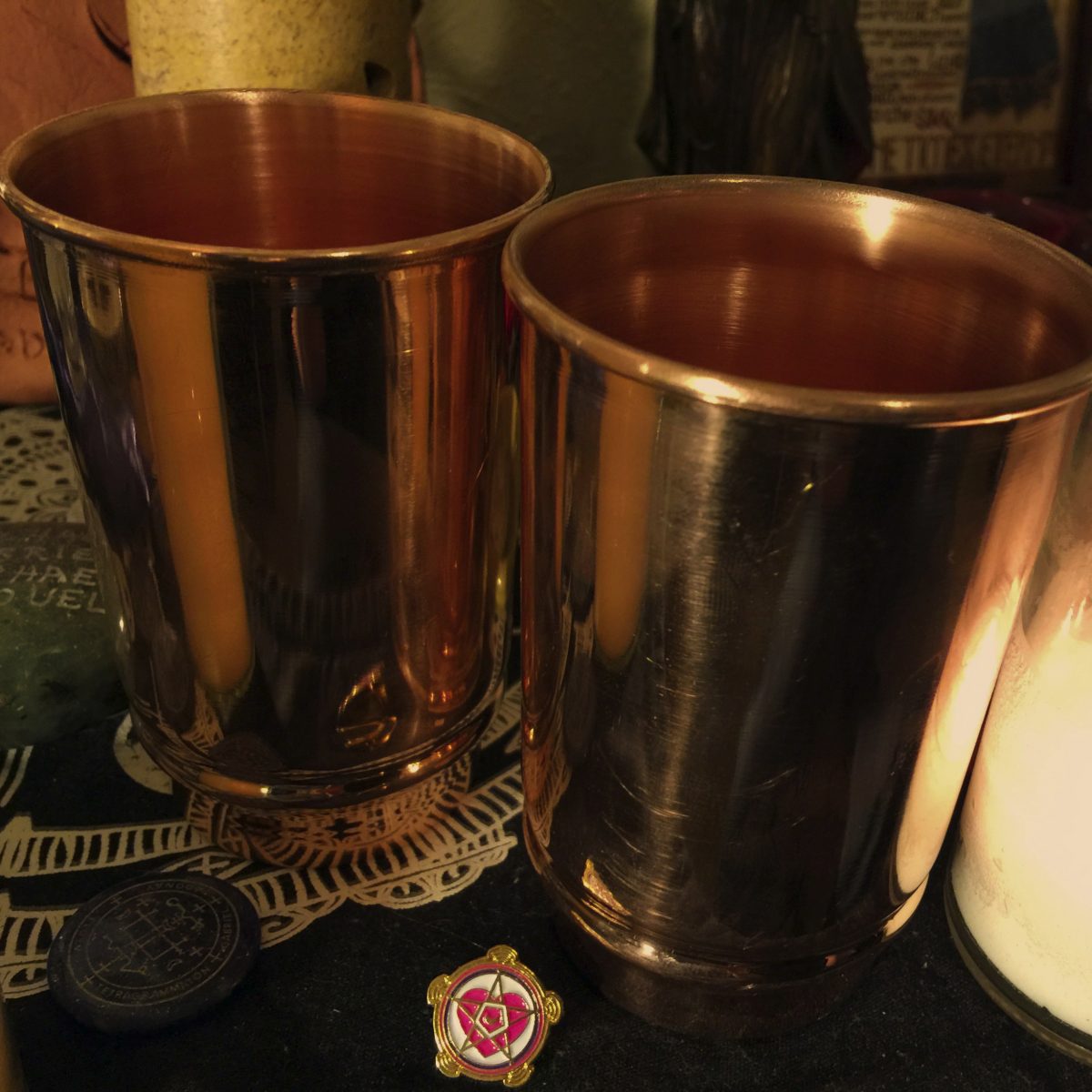 My friend @stefficus and I talked about containers recently. I don’t just mean plastic storage bins, but containers including signs, decans, cosmological concepts, the universe, you, and more. Back a little over a year ago, I had written about humans as “hollow vessels,” and there I focused more on how we choose to fill ourselves:

That hollowness caught my attention. I thought about how spirit contact for me can feel like they’re filling me with their speech and thoughts, and I had pondered how does one go about filling oneself with oneself. The hollowness of Adam in this passage also suggests a kind of extra-dimensionality: Iblees can literally look into Adam and sees there’s not much there.

And we talk about possession as entailing spirits entering into persons and inhabiting them. But we also talk about filling ourselves with all sorts of non-food, non-drink things.

Always at least an hour ahead of the rest of us, Gordon has described various orders of things as containers. I’ll point to his broader reference of this container idea from Star.Ships: “This very book rests on the proven hypothesis that local mythology can be a container for recognisable astronomical, climatic and consciousness-based experiences.”[1]

For example, and it’s an example that Stefficus and I discussed, the decans were associated with specific stars and star spirits at earlier points in time. Indeed, Sothis/Sirius and its heliacal rising signaled, heralded, the beginning of the Egyptian New Year, with the rising of the first decan of Cancer, but stellar precession has seen many stars move from their Old Kingdom decanic locations. Regulus processed into the first decan of tropical Virgo in 2012. As 10° segments of the sky, decans remain astrologically and magically potent, but those segments can seem to be more containers for such powers than the powers themselves.

You see, the stars and their spirits still are, but how they express their power on Earth probably has something to do with how they’re “contained.” As Kaitlin Coppock observes about Regulus’s procession into Virgo 1:

The passage of that star in 2012 from 29° of Tropical Leo to 0° of Virgo represents a significant paradigm change in the consciousness of beings down here on our planet. One way of seeing it is the passing of power from the “divine right of kings” and patriarchal structures that have dominated the last 2000 years the star has resided in Leo, to the democratization of power and the “ascension of the common woman”, and really all individuals, in Virgo.

We are in a transition phase as the light we currently receive was emanating from the star’s location in Leo, and the Virgoan cast has not arrived on our planet yet. It will be fully manifest in the year 2082, which may give us some indications regarding how long various social justice movements will take to fully imbue our global systems.

Regulus is still Regulus, but from a humans-on-Earth perspective, its power is now contained in Virgo 1. I find it interesting to consider how this Royal Star’s potency shifts depending on the container it now inhabits, let alone as I think about the increasing archetypal resonances I see from my and others’ experiences of lions, women who control their bodies (consider the older archetypal associations virginity could express: think Artemis and Athena, among others), “beauties and beasts” and that imagery expressed in the Strength tarot trump and elsewhere. Despite how some doomsayers have tried to interpret such archetypal expressions in human culture, well, archetypes gonna erupt, above and below.

Further, I find it interesting to consider the human apprehension of those containers. Bernadette Brady points to earlier astral vessels:

Lost in antiquity and mythologically connected to Leo, the ancient goddess in the sky was probably part of the original six zodiac constellations and is considered by some astronomers to be over 15,000 years old in human awareness (which was about the time the spring equinox occurred in this constellation)…The earliest expression of Virgo was about 2,900 B.C.E. with the construction of the Egyptian sphinx, believed to be a celebration and adoration of the two zodiac signs through which the sun traveled at the time of summer and the harvest. The sphinx had the head of the great harvest goddess and the body of a lion…

The Egyptians drew her on their Denderah zodiac, larger than she is now and with no wings but clearly a goddess. They saw her as the thousand-named goddess Isis, a wheat sheaf in her hand, which she dropped to form the Milky Way.[2]

I point to this to think with the idea of how Regulus expressed its power into our world in earlier era. Where we now know these asterisms as Leo and Virgo, other cultures arguably saw them as one celestial container, especially compared to Regulus being Leo’s alone. Indeed, the sundering of Leo and Virgo left Leo royal while Virgo often seems to have had a negative reputation.

Thinking about these kinds of containers also gets at the divide between sidereal and tropical astrological signs. From a sidereal, looking up at the sky perspective, Regulus is still in the visible asterism Leo, but magic in the West—let alone actual predictive astrology in the West—relies on the tropical signs, which are more “containers” in the sky for particular potencies that once correlated to the visible asterisms. Of course, I’ve noticed that some spirits seem to respond much more strongly when particular asterisms are rising or otherwise are in the sky above—or, I should say, that seems to be the case. I have wondered, is it not the asterism itself but perhaps the decan or tropical sign, those whatever fixed star is rising or at the midheaven, some other asterism, or just my planetary day and hour timing worked well.

Let me return to the decans, though. In the Sacred Book of Hermes to Asclepius, Virgo 1 is described as follows:

It is called ATHOUM, Its face is that of a dog with a crest on his head. His body is hot (?) and fiery in colour. He stands on a pedestal, and governs the belly. Engrave him on a corallite stone (possibly coral), place under it the plant called weasel eye, enclose the whole in whatever you wish and wear it. Abstain from eating white sow liver.

In the first volume of The Testament of Cyprian the Mage, Jake Stratton-Kent[3] explores the various names and treatments of the decans and associated gods and spirits in antiquity. For Virgo 1, he identifies Athoum as well as Oueste-Bikuti (Ptolemaic), Themis (Ostanes), Tōm (Hieroglyphic, Hephestion), and Iathoum (Hermetic). Meanwhile, the Picatrix includes images for the decans as ways of accessing their potencies, eschewing names to go with said images for a variety of reasons. Virgo 1’s image in the Latin Picatrix is

a young girl covered with an old woolen cloth, and in her hand is a pomegranate. This is a face of sowing, plowing, the germination of plants, of gathering grapes, and of good living. This is its form.[4]

I think it’s tempting—because I’ve done it myself—to want to render these forms, names, beings as equivalent or as exchangeable faces of the same power. Maybe they can be. More accurately, though, they appear to be expressions of similar kinds of potencies contained within these decans, these 10° slices of the heavens, contained within the signs (tropical and sidereal, really, it just depends on how you want to slice the sky). As the planets and luminaries move through these containers, the planet expresses its own potency in ways inflected by that decan.

From the Mantegna Tarocchi

An easy way to think with this is to consider Virgo 1, for example, as being a particular kind of house, designed and decorated and with the ambience of Virgo 1. When the Moon comes through Virgo 1, imagine your preferred anthropomorphic lunar being being in the kind of house that Virgo 1 can be, and compare that to how you imagine Pisces 1 would be like as a house. The Moon will act and feel different in that place than in another, just like you feel and act differently at home compared to the dog park or work.

There are further ways of thinking with containers in this regard. Stefficus and I considered Agathos Daimon as the serpent-dragon who orders the heavens, and thus the signs and decans[5], and I can imagine the decans as being like the celestial serpent’s scales, each shimmering as the heavens and stars and planets turn. And I can’t help but also think about how the ancients considered the decans as projections of or as governing the human body, so we are contained in the decans above. Do we also contain them down here?

However, my point, really, isn’t to belabor the decans so much as to use them as a way to talk about containers and how we can think with them, use them, and so on. I mean, everyone keeps going on about Marie Kondo telling folks how to shape their containers and thus how they contain their lives, and we are hollow vessels already. But, so, too, is Nuit, the sky, the lunar mansions, the decans, the signs, the shadow place where the head and tail of the dragon come together, and most everything around us. In a way, I’m talking about the interiority of the cosmos and its constituents.

[3] JSK also includes a translation of The Sacred Book in volume 1.