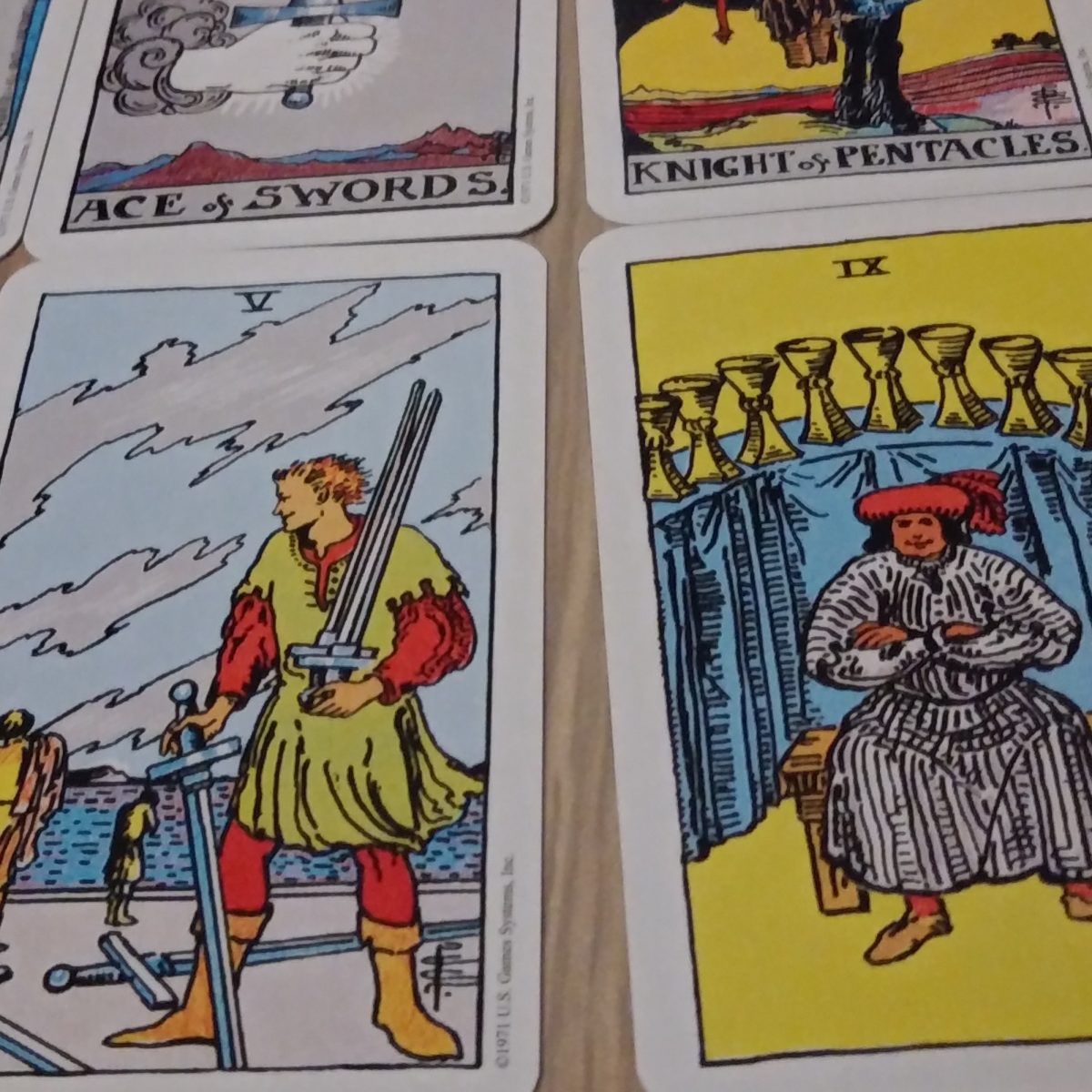 Over the last couple of years, I’ve explored astrology and geomancy, and both practices have contributed to my larger practice and lifeways. Tarot remains my go-to divinatory or fortune telling method, though. I also use it often for facilitating spirit contact, especially if I need some help getting to the right headspaces at the time.

I have a handful of spreads I use. I’ve played with several of them, but I remain fairly loyal to the Celtic Cross, though I usually wind up using it in an exploratory manner rather than going at specific questions. “What do I need to know?” “What would you tell me?” “Tell me about NN.”

&#8220;Tell me about NN.&#8221; Celtic Cross spread using The Tarot of the Sevenfold Mystery by Robert M. Place

Otherwise, I tend to go with three-card spreads—sometimes two cards, but usually three. I don’t do Past-Present-Future, nor do I do Subject-Verb-Object, though if three cards suggest such a structure themselves, then I’ll go there. I’ll look at the sequence, the relationship that the art on the cards suggests, and so on.

Towards the end of the month or the opening of the next, I will typically do a 12-card spread arranged by the astrological (or geomantic) houses. I will ask the cards, “What should I expect for July?” or whenever, and I’ll lay out the cards, starting with the 1st house and progressing around to the 12th.

You can find descriptions of the houses across the internet, though I would encourage looking at sources that avoid the 12-letter alphabet (i.e., Aries as archetypal “First House”) in favor of more traditional associations, such as you can see in Kelly Surtees’ handy reference chart, with an eye towards how those associations can manifest in 21st century life.

As an astrology and geomancy amateur, I find that this spread helps me familiarize myself with house associations while using a modality I feel confident with. Otherwise, it provides me a snapshot of the coming month, highlighting potential problem areas for which I could do more exploration or try to prepare for. It’s also a good spread to go back and look at once the month is over, to give yourself feedback for how accurate your reading was so you can improve your prognostication muscles.

I may also add three final cards to the spread, depending on how I’m feeling, and these are inspired by geomancy: the witnesses and the judge. Their interaction and culmination in the judge can be thought of as a summation and “concluding paragraph” of the whole spread.

Same question as above, but on the inside are the Left Witness, Judge, and Right Witness.