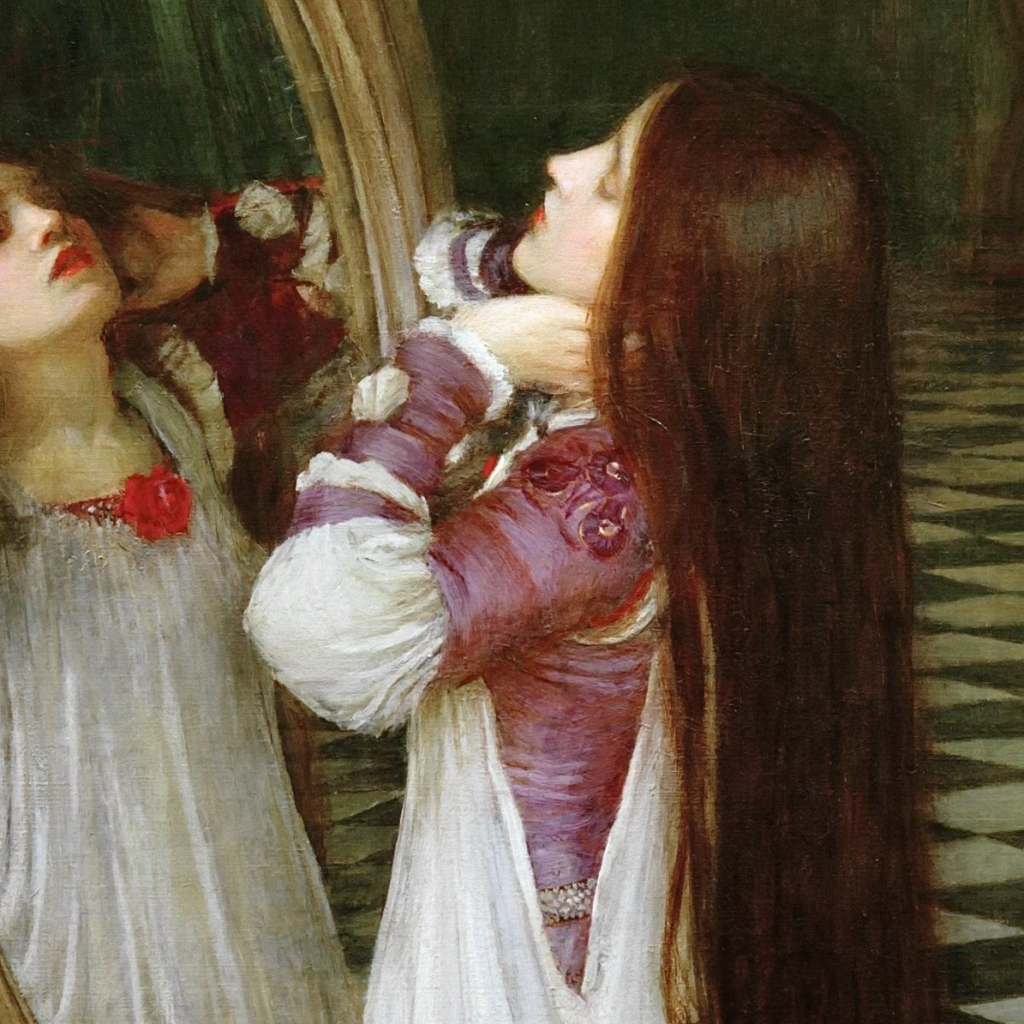 In reading Alkistis Dimech and Peter Grey’s The Brazen Vessel, I have found myself venturing off onto adjacent tracks from where they’ve been going in the collection. One section that especially caught my attention came in “The witches’ dance” where they write of the “contrariwise” movement of many pre-modern dances, which they associate with the “law of inversion.” The idea of inversion or mirroring proved fruitful for me because I’ve found myself coming up against dozens of synchs that come down to instances of mirroring.

I don’t just mean that inversion or mirroring are some kind of consciousness technology that allows humans to do something. I think that’s also true. However, as I’ve thought about this subject and reflected on it, I think instances of inversion and mirroring, especially when engaged with some form of intentionality, do something. It does real things. I would even argue that the act of imagining inversion is itself inversion, just at another point on the sliders of realness and embodiment, which are not the same sliders.

From a Kohnian, animist view of the world, these inversions do things. Kohn uses the example of the wind over a bird’s wing being a kind of non-verbal language (or perhaps discourse, for the bird’s wing) that the world uses to express Flight. Humans have learned enough of that language of the birds to achieve flight themselves. In a similar manner, I argue that inversion/mirroring are discourses involved with opening and bridging the human order—social, physical, embodied, etc.—into the imaginal/spirit world (“the Realm”), beyond the surface of the human experience of the world. Beyond considerations of as above/so below and similar concepts, these processes of inversion/mirroring put me in the mind of how UFOs are often associated with bodies of water, and how they indeed often emerge from or disappear into bodies of water. While most folks treat USOs as a distinct phenomenon, I wonder if—from a “magical” perspective—USOs and UFOs are just mirrors of each other, sometimes moving from one side of the mirrored surface of the water to the other. Something similar may also be in play with descents from the heavens (a “fall” as an inversion to the earth) and ascents from underground (from another world, inverted below us).

Photo by Josh Hild on Pexels.com

Note that the Scarlets choose to emphasize inversion in “The witches’ dance,” and I am appending for consideration mirroring. The Scarlets focus quite a bit of attention on “inversions of order,” but I think mirroring is important to link with how we understand inversion. Inversion is often seen as an opposition to the typical order of the world. It is often seen as a demonic negation, which it is from the perspective of flat human authority. What do I mean by flat? I am borrowing a bit from Flat Land concepts here, and I mean flat as avoiding or failing to be actively engaged with the spiritual and imaginal depths of the world. Flat authority typically views these inversions as attempts perpetrated by “inferior” and othered populations to negate its ruling authority and social order, much like these authorities also view women’s lives and bodies when compared to men’s, or other One:Other binaries, such as racialized bodies or bodies defined in terms of class or ability.

I would argue that inversion/mirroring are entanglements and flows from the human to other-than-human worlds, and back again. They can represent extensions of the community into the Realm, which seems to be the point of “fertility rituals”: to invigorate the community and country and to keep open the roads or surfaces between the human world and the other-than-human sources of vitality that the community needs. These inversions and mirrorings may be “inversions” of human social orders, but they may be less “negations” or disruptions of cosmic order than they are human attempts to entangle with deeper orders, orders found in the imaginal, spiritual world, and approached best by humans, per the Scarlets, in embodied modes like dance and ceremony.

In my reading of the Scarlets’ essay, it seemed to me that the urban elite demon-ized the rural entanglements with the Realm while promoting urbanity as a kind of human monoculture habitat. Now, Gordon White has argued in several places that cities are a result of pacts with particular kinds of spirits.[1] Those spirits are using human urban habitats for some purpose. I would hazard that, in part, they may be using cities as a surface to emerge from into our world.

I would also argue that cities may represent an inversion from the Realm into the human world. Kohn describes the domains of the spirit masters, which humans normally only experience while dreaming. What waking humans see as wilderness is, from the perspective of the spirit masters and of dreaming humans, gardens and cultivated territories. Many NDE and EOL experiences also describe dying humans encountering beautiful gardens as they find their way into the (nearby) spirit world. Similarly, Eduardo Viveiros de Castro has described how humans may perceive a snake’s burrow as just a burrow, but to the snake, its home looks like a “human” home. The difference lies on whether we as humans allow ourselves to perceive other beings as persons, and we perceive personhood through our humanoid perspectives. My point, though, is that cities may represent spiritual domains and communities “inverted” or “mirrored” into the human experience of the world.

Cultures retaining carnivalesque “inversions of order” may allow the vitalizing forces of that culture and the city’s hyperthickness (rather than flatness) to flow into the human experience of the city. I would also want to consider how the community engages, or not, with the city’s “gods” (whether gods, spirits, ancestors, saints, or whoever else). Note that these are not continual entanglements of the imaginal with the human community, but seasonal, constrained, controlled, festival forms of entanglement. These forms seem to be highly conserved since time immemorial.

As I noted, the urban elite demon-ized other humans’ attempts at embodied entanglement with orders of the world distinct from the urban elite’s, and I cannot help but think of the monoculture nature of urban elite authority as leading to what typically afflicts monocultures at some point: pests and parasites. Civilizations have parasites riding human social elite, most of whom lack a functional, embodied relationship with their desires. Those elite have also effectively mimicked the spirit masters, albeit unconsciously and imperfectly. In essence, they have mirrored the spirit masters without proper intentionality or ceremony. I would argue that parasites have probably often stepped in to ride them and to become de facto “human masters.”

If my thoughts on this parasitical inversion of the spiritual into the human world is accurate, then I have to wonder, what does proper relationship and entanglement look like? That’s hard to say. The “spirit masters” of Ancient Egypt probably included the forms and images of gods, mighty dead, and shamanic royal ancestors cooperating with the living to bring the recently deceased elite into the fold of pharaohs as de facto royal saints. Egyptian culture may have used its immortality technology as a way to move royal elites into the blessed dead quickly and consistently, much as canonization can do with saints. The purpose would be to ensure regular and proper entanglement of the human world with the other-than-human vitalizing forces.

However, most elite families have stopped sacralizing their ancestors, so I suspect you have hungry elite dead riding their living descendants while failing to tend to the health and sanctity of the community as the shamanic and saintly royals would have been guided to do. That is, while non-elite families have seen their ancestral dead remain unresolved and mired in the traumas of their lives, reproducing their hungry dead appetites and ghost dramas through their descendants, the elite dead have likely reproduced perverted attitudes of royalty and power.

Otherwise, I would say that the path towards rehabilitating human and other-than-human habitats requires what the Scarlets have been pointing emphatically to for years now: embodied engagement with the world, whether in &#8220;nature&#8221; or in the edge ecologies that emerge between the human urban and the other-than-human, such as in their experience of Cornwall. My point here is that inversion and mirroring&#8211;through dance, ritual, theater, art, and more&#8211;is the literal technology we can use to bridge the &#8220;merely&#8221; human world with the spiritual.

Featured Image: Mariana in the South by John William Waterhouse

[1] Beyond the linked post and Pieces of Eight, see the Rune Soup Magical Geography course…and many many TARL Q&As.