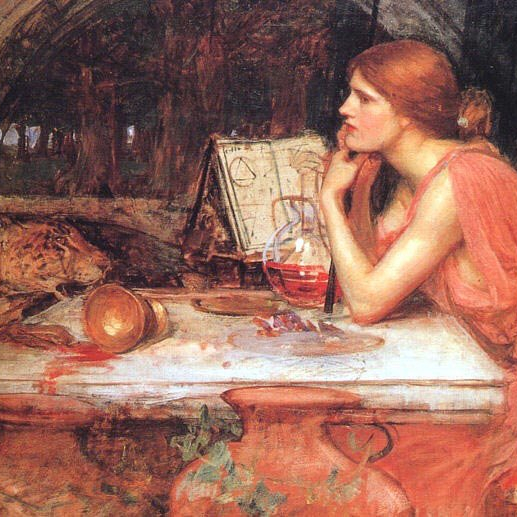 I first came across the idea of working with “dead magicians” via Radio Free Golgotha—Al Cummins and Jesse Hathaway Diaz. Indeed, one of RFG’s features is a discussion of a specific dead magician in most episodes, and dead magicians can include far more mythic persons than the “ghosts” of “historical” magicians. I mean, let me list the dead magicians RFG has pointed to:

In most cases, this list generally ignores the saints as possible dead magicians, which is certainly a way to relate to many saints, like St. Cyprian of Antioch but also St. Joan or St. Hildegard or…

In this post I want to share with you some of my experiences in collaborating with dead magicians, or in some case, trying to collaborate.

Mind you, you might ask, Why talk to dead magicians? Well, to paraphrase Cummins, to learn from them and to petition their help for the kinds of enchantments that they&#8217;re adept at.

I’ll start with the Morrigan. You might be saying, “But isn’t she a goddess?” Sure. However, she also has longstanding associations with Neolithic sites, including the complex at Ráth Cruachan and the Cave of the Cats. Her relationship with this specific geography, including the Cave as an access point into the underworld and the Otherworld, have the strong whiff of an ancient queen and magician still very much involved with Ireland and the world. Her associations with magic, cursing, and more also seem suggestive to me of her acting as a “dead magician” who has ventured deep enough into myth that, even were she “just” a “ghost” or one of the “Mighty Dead,” she’s blurred that distinction—or grown beyond that role—to become “more.” I could argue something similar with Odin, given his relationship with the dead and other things. I would also say that the rather active and often recruitment-driven agenda of both the Morrigan and Odin strikes me as dead sorcerer-monarchs on a mission.

I’ve written quite often about adventures involving the Morrigan here, albeit most of those posts are older and often rather raw, redacted journal entries. I had my Spiritual Death And Rebirth experience at her hands (or her ravens’ beaks), and I spent quite a bit of time early on in visionary practice just…relaxing at her camp, by her cauldron. My journeying experiences to one of her holdfasts wound up having profound synchs in the human world as my roomie wound up being told, out of the blue, by two very different friends of his about their hypnagogic experiences with the same locale in the imaginal: beyond a toxic lake and the living cabin that eats the unwary.

I remain very much on good terms with her, and I touch in once a week. If I need to go on a cursing campaign, she’s going to be my go-to teammate.

I’ve also have had excursions with Odin, though they have always been rather one-sided, and I always resisted going too deep with him. His reputation for causing eye trauma should always be well-considered by those interested in trafficking with him. He can be persistent in wanting you to sign on with him, but I have found that having a powerful female spirit’s presence in your life (Hekate, for example[1]) can have him begrudgingly pass by and behave, and I’ve had little contact from him since starting a relationship with St. Cyprian.

That said, I also suspect that quite a few beings like to dress up as the Morrigan and Odin. However, both will definitely adopt the kind of relationship to you that you go in expecting/presuming. The Morrigan will be your deranged raven mom if that’s the way you expect to relate to her, but she can also be your (big) sister. (Part of it also depends on where you’re at in regards to relating to “gods.”) Odin is fine being your creepy Sleipnir riding ghost sex daddy (I think that string of words works however you wish to insert punctuation), or your all-seeing domineering king, or the devil at the crossroads, or…

The first saint I really began doing anything with was St. Cyprian of Antioch, during a Rune Soup Sigils Course guided meditation/journey, and during the journey, I decided to be precocious, and as the journey ended, I was surprised to get the strong sense that the saint was grinning at me—one part, “Yeah, cute,” but also “Gotcha.”

The good Saint Cyprian of Antioch, whose feast day is September 26

That was in Q1 2017, and since then, he’s been in plenty of journeys, he’s there when I look Nearby, and he’s popped in when I’ve prayed for him to help other folks. He’s a sorcerer-saint who very much occupies the mythic pre-congregation saint territory, but I’ve found those saints far more responsive and helpful than many others. I like to launch most operations with a prayer for success with St. Cyprian, and I do his protective prayer every day. And I’ve also been developing a quieter relationship with St. Justina, as well.

All that said, not everyone gets Cyprian’s love equally. He first showed up for me years ago in a dream that stuck with me (it involved me as a wizard, him, and a bunch of other people, including the Pope). I wound up having a synch from my own personal gnosis—I’ve written often of axes mundi and world trees and such here—with one of the Iberian Cyprian prayers for success: Cyprian’s holy mount, the tree of the zephyrs, and the great oak. I started seeing them back in 2014, but I didn’t encounter the prayer and get hit with the synch until 2017.

He can be stern at times. He can be playful, too. He likes purple. He has proven a mentor by helping with general uplift in terms of learning how magic can work, understanding magic-related concepts, and the soul work that can accompany the magical life. And he’ll have your back. I recommend ConjureMan Ali’s Saint Cyprian chapbook as a starting point, if you’re interested.

There’re a host of other potential “dead magician” saints out there, though Cyprian is the explicit sorcerer-saint. I would also recommend considering Sts. Teresa of Avila (journeying and visionary practices), Hildegard von Bingen (hermetica, herb lore, medicine, and general ass kicking), Joan of Arc (was certainly tried as a witch and saw faeries in addition to saints and angels, even if they burned her for cross-dressing), Columba (expect doves and thunderstorms), Martha, Catherine of Alexandria, Eluned, Brigid, Thecla, Agnes, Mary Magdalene, and the Three Kings. The neat thing about approaching saints, especially the more mythic saints, is that there’re usually prayers and practices already available for getting their attention, and a candle, some incense, and some water can go a long way. You may need to jailbreak your relationship with saints and/or Christianity, but I would certainly encourage you to do so. Take them back for the people needing to get shit done in the world.

The last native Welsh Prince of Wales, Owain Glyndwr is best known outside of Wales via Shakespeare’s character of Owen Glendower in Henry IV, part 1, where he is indeed one of Shakespeare’s professed wizards. (Hotspur may doubt Glendower’s magical ability, but only one of them is dead by the end of the play.) Glyndwr remains a legendary patriotic figure in Wales today.

Glyndwr’s sorcerous reputation remains popular thanks to Shakespeare, and I would argue that there’s much to recommend approaching him. Although I first came upon his legend via Shakespeare, I stumbled into Glyndwr himself while on ancestor business a while back. For a time, indeed, he seemed like he was very interested, and I had the sense that he was coming. I often had visions of him riding a horse on a long, hard ride through forests and across a desert coming towards me.

However, that connection failed to manifest, and I have the sense that he got diverted or ran into roadblocks. It may be that our mutual proper time hasn’t come yet. I’ve had similar experiences where initial contact occurs, but it doesn’t land or manifest properly until later. The reasons may be astrological or relating, perhaps in this instance, to the need for more ancestral business. If you’re interested in approaching Glyndwr, I would recommend using William Blake’s channeled sketch as a magical image.

And now I come to the dead magician for whom I originally started writing this article. Pharaoh Sobekneferu, the “Beauty of Sobek,” is the earliest confirmed female pharaoh of Egypt, ruling for four years from 1806-1802 BC, when the Twelfth Dynasty ended. I first heard of her via Paul Weston’s descriptions of Andrew Collins’s visionary exploits involving her. I was intrigued by the descriptions of folks receiving psychic downloads on how to “resurrect” her into our world and how a painting of her came to life, and she departed into the English countryside.

What really got my attention, though, was when I came across Paolo Sammut sharing an image of a commissioned painting of Sobekneferu, “not as she was…but as she appeared to” him. And, indeed, the painting was quite evocative, quite active, and I decided, Well, come on then, Sobekneferu. Well off book already at this point, I printed out a nice color print of the painting, put it in a frame, and had a bit of inspiration on assembling a space port for her presence to land. I’ve pointed at the star port previously, and it’s essentially a stylized arrangement meant to be suggestive of the Giza temple complex, or that was my thinking. Of course, she has nothing historically to do with Giza, per se, other than the plateau’s long attested relationship with the dead (see, for example, Star.Ships). Here’s my setup in diagram form.

I like to do this late on Sunday nights. I’ve taken to anointing the candles with the Regulus oil from Sphere + Sundry. Sit, light the incense, light the candles. On the first try, you might lead in with the Agathos Daimon hymn from the PGM or the Headless Rite. From there, say something like the following:

O Sobekneferu, Pharaoh uniting Upper and Lower Khem, she who is Horus [or Heru], who is Osiris [Asar], who is Ra [Re]—you are the Beauty of Sobek. O Sobekneferu, I offer to you anointed flame, incense, and water; may they take the forms that most please you. Come to me, Sobekneferu.

Repeat this a few times until you get her attention, or if you’re not sure she’s responded, say it at least seven times and then sit and meditate lightly for several minutes at least. Look into her image as you do so. If all else fails, you might also consider asking Hermanubis to act as an intermediary.

As a pharaoh, I would definitely classify Sobekneferu as a dead magician—an immortal dead magician, a shaman-king even, to pull from Jeremy Naydler. Unlike many pharaohs, I suspect that she’s on a mission in our world. I think she’s also wanting recognition as a legendary figure, especially given the disdain her successors amongst the pharaohs typically bestowed upon her. She also presents a genderqueer figure. Though born a woman, she became king, and more pertinently, she became Horus, Osiris, and Ra. I think it helps if you can—or have—touched your own non-binariness, your inner royalty, your sovereignty, and have played with the stars at all.

For me, this ritual has sung, and I have very much appreciated the insights and mentorship I’ve received courtesy of Sobekneferu: star lore; the celestial, the terrestrial, and chthonic; image magic; imaginal entanglement; and more.

What dead magicians are you hanging with, or who have you pondered reaching out to?

[1] Although I include The Morrigan and Odin amongst my list of potential “dead magicians” here, I would not personally include Hekate amongst that coterie, though she certainly “revels amongst the souls of the dead.”