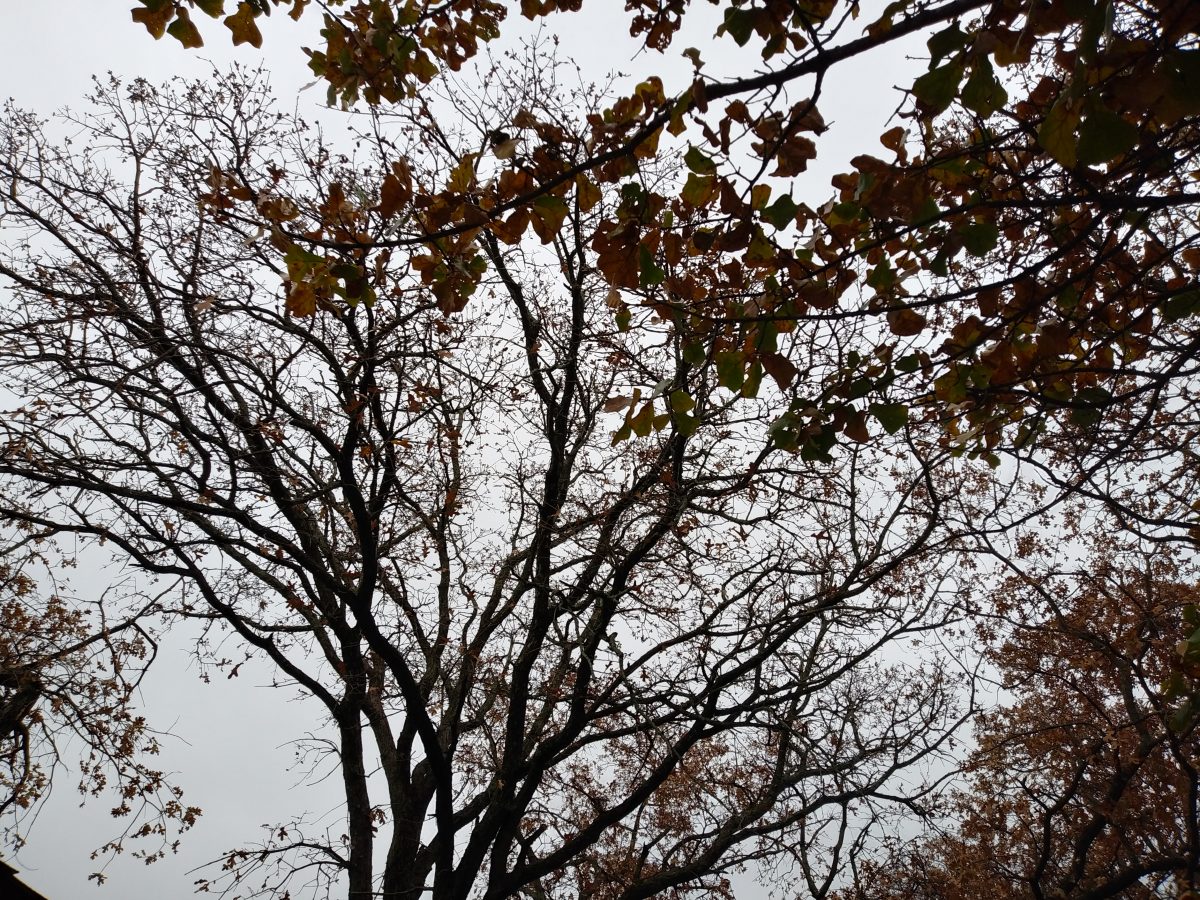 It’s a day that many would call “dreary.” It’s cold-ish, drizzling, with overcast light gray skies. The trees are bare of leaves or are busy casting off their summer dress. There’s a slight breeze, but I can know what a stiff wind through this would be like. It’s otherwise rather still and quiet. Partly, that’s because it’s Thanksgiving here in the States, and most folks are indoors, visiting family, watching American football or playing video games.

Many folks would call this a dreary day. And I had that thought until I realized what this all reminds me of, at least away from the football business.

It reminds me of some of my more memorable encounters with Faerie in dreams or otherwise. The dreams have all been brief. Quiet. Very intense and focused. In one, a woman was whispering intently to me from a few feet away even as all I heard was a soft hiss from the environment, like noise on an audio line, or the blood and air in my ears. The room I had dozed off in was still there, quiet, brighter but paler. In another dream, the same woman, though seemingly older, more mature looking, was very close. She had long dark hair, pale features. She did not speak, but looked to me, into me. In another dream, there was something like that hiss, and leaves and branches and hedges seeming to swirl all around me and, just on the other side, myself. And my other self came close, as we eyed each other between moving limbs of the forest—a sense she had been rushing rushing rushing, but now, she paused, came close, eye to eye. Her eyes azure, a sharp contrast against the twilight, overcast gray light that seemed to saturate everything else.

So, today reminds me of Faerie, is a Faerie day to me.

It certainly feels colder and wetter than I noticed in my dreams and other visions, but the light has that quality that bespeaks something other.

I have been thinking about personal mythologies lately, or, at least, that we all have a Mythology, even as we’re embedded in a tangle of myths and stories and more. But we all also carry with us our own private Mythology. It’s what has haunted us since we were young. It’s probably what’s lurking in your birth chart. It’s probably what’s expressing itself through you from your ancestors, and probably the deeper ancestors. It’s what you doodle, what you have odd dreams about. It’s what you encounter when you start doing magic and stepping past the surface of your life into what’s a little deeper, if not much deeper.

I’m not talking about more general dreams and fantasies and things like that. It’s not about your favorite D&D power fantasy, but no shade here. It might be what you notice in the trajectory of many of your characters, or in the recurring motifs and images in your kinda ecstatic not-quite-free-verse-but-certainly-not-a-sestina poetry. It might be there in what you see when you look out into the forest and see shapes and faces and animals and more that maybe only you can see.

Or, which only come close to you.

And I’ve been thinking about my Mythology because I’ve always been thinking about it, or I’ve been ignoring and doing my best not to turn my attention to it. And it’s not been something, I’ve realized, that I would have recognized or “understood” when I was a kid or in my teens or in my 20s. But, that Mythology has been peeking through, erupting, since I was a kid. And I’ve misinterpreted and brought my own analytical overlay onto those experiences, and with that bullshit in the way, I lost sight of it for a time. And then, years later, as I try to avoid censoring myself, as I try to let those experiences and moments be and to sit with them, and as I have gone diving more deeply into contexts—well, I’ve been recognizing and having to acknowledge that my Mythology isn’t the one I would have expected.

But then, one day, I’m reading or talking to someone about something, and I suddenly realize other people notice the same motifs in spells we do together, and they’re my motifs that I felt weird about mentioning because I thought it was “just my thing.” Or they can see facets of me more clearly than I might. Or I suddenly discover that what I have discovered, stumbled into, dreamt about, and so on was also there in the Pyramid Texts, in Tolkien, in Alexandria, in various gnosticisms, in Paracelsus, in early Christianity, in the lifeways of my ancestors, in the stories and myths of the places I’m living in, in Henry Corbin, in Dr. Rudd’s angel writings, or in the lunar mansions and stars, or in the stories of a close friend that suddenly—and by surprise to both of us—include me…

I will tell you that one of the things I have had to learn is to open my heart, to engage and trust my intuition, and to trust my experiences—especially when I also get the synchs, when the universe and spirits communicate back to me. I have spent, on reflection, a ludicrous amount of time in schools, as a student and now faculty—not that spending a ludicrous amount of time in jobs in late-stage capitalism would be better—and I have been spending the last several years remediating how I deformed my worldview and myself through all that even as I know the roads that time opened for me.

I talk to myself a fair amount, and I was self-narrativizing to myself last night, thinking aloud about things I’ve done and seen and so on. And I thought about some of those dreams and visions of Faerie, and I had the feeling I was reaching out to Faerie and pulling myself closer. And now I notice that this “Faerie day” is, in fact, a call-back from last night.

I also had to recognize how I do have this Mythology. Well, I have this Faerie Mythology but also a whole lot more.

And I can see how I would have doubted all this years ago, when I was younger. I can see how it might’ve gone to my head. I had engagements with it in the ‘90s, but on reflection, there was also a ton of analytical overlay and doses of denialist delusion and more. And now, with the synchs and realizations of just how deep these roots run through my life, they can spur that “fuck yeah, magic” joy, but I also feel a certain mysteriousness about it all, about myself, mingled with less pride and ego than growing acceptance. Confidence.

One of the most important pieces of advice Gordon White ever gave me was that the way to keep yourself sane with all of this stuff is to cultivate a healthy sense of humility. It is entirely too easy to let this stuff go to your head about how special you are. And I’m not here to tell you how special I am, or to go into “Let me break down my personal Mythology for you.” I’m here to tell you that you have your Mythology. It weaves through your life and into the places you’ve lived, your family and ancestors, and your wyrder, closer friends. It will probably eventually lead you to find its expressions in “official” mythologies. It will probably surprise you and make you feel uncomfortable by turns, but also, you may say, “Well, of course…” And it will likely lead you to find the others, and your wyrd friends with their developing, deepening Mythologies.

And I would tell you that the way I seem to have gotten at my Mythology is that I daydreamed. I journaled a lot. I paid attention to my dream journals. I found the way that I can pretty reliably do meditation and journeying and the tricks of headspace and personal tech that let me go “there.” I got drug to talk to the others, and that opened so many things there. I made art, as well as I could, and in making it, it was better than the art skills of the Theban sorcerer who assembled the PGM…but I also found that art arresting. Spurring. I worked on my own little hypersigils and Black Books (rather than a Red Book). I did all the magic even as, on reflection, I’ve also invested a bunch of my magical attention on trying to get my Mythology consciously active. And I certainly don’t understand all of it, but I seem to be living it. And tarot. I got better at tarot.

So, basically, find your Mythology. Bring forth your Faerie day. Or your Aesir day. Or your Bright Shining Lands day. Or whatever day you have inside and with you.