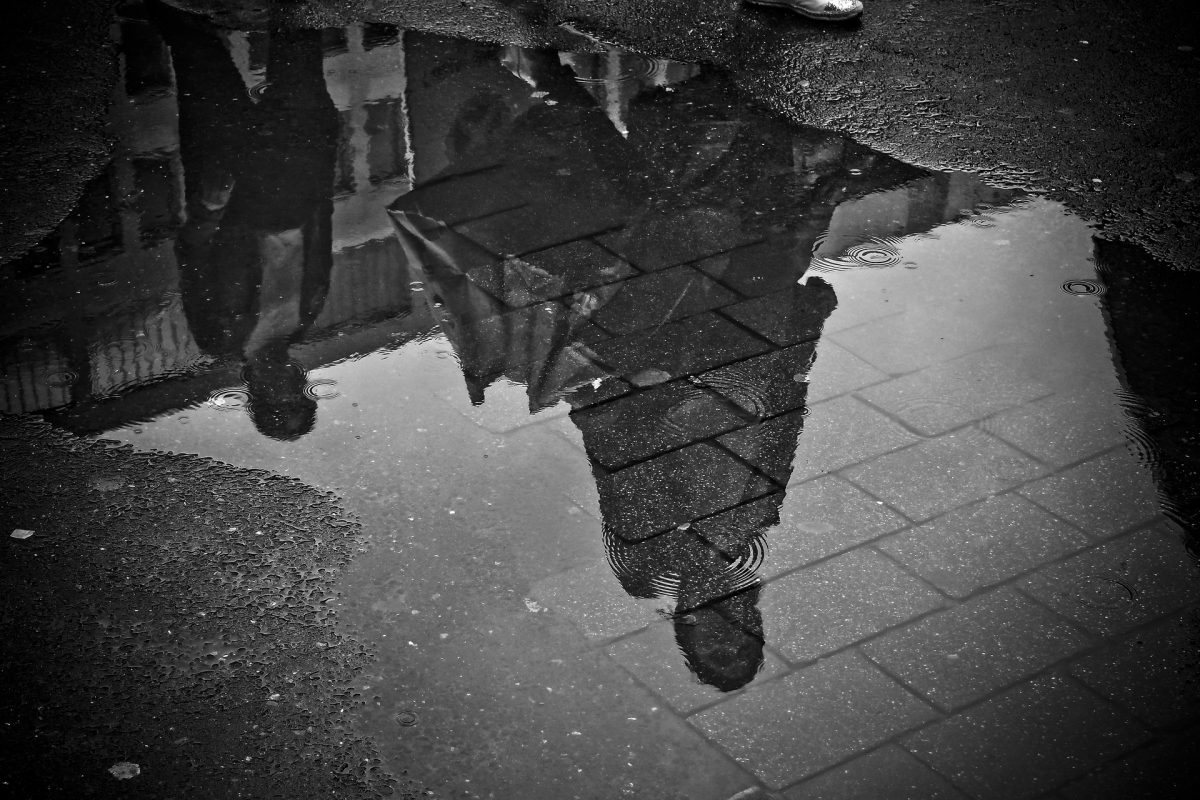 I tried using a scrying bowl filled with spring water the first few times I tried scrying, but it wasn’t providing the experience I needed or wanted at the time. I had acquired a small obsidian mirror a while back, and I have a small, handheld (well, finger-held, usually) obsidian orb or “shewstone.” They work far better for me.

My process of using the obsidian has varied depending on what was going on. In one instance, it worked a bit like a “telescreen” or “scanner,” and the surface of the mirror became an aperture through which I saw and communicated with a spirit in what wound up being a rather profound exchange. In another instance, the reflections of candlelight in the mirror became something more—the eyes and face of the being I was speaking with. In other cases, it’s like the cover image above. I looked into the waters at a local stream the other day, and it was an overcast day, and the reflection was smooth, without glare. But I suddenly was struck by several things.The inverted quality of many cultures’ other-worlds may emerge in part from how these reflections point to another world that’s much like ours—but inverted. The skies are darker, the light more twilight-like. It is literally the Upside Down from our perspective on this side of the reflection.

However, my point about this is that in these instances, and in many instances with reflections in “dark mirrors”—including puddles, rivers, waters, and even my phone’s dark screen—I’m often “scrying” and “seeing” by projecting my attention into the reflection. In these reflections—especially, dark or partial reflections—well, a dark mirror does not show all of the scene. We must enter into the mirror, perceiving and imagining what else is there beyond and around the edges of the surface before us. And I find that in doing so, I can more easily perceive what I might call the Nearby.

Like this, but with less sun in my eye.

I had this notion the other day and then, later, without prompting, decided to go look at more videos with Becca Tarnas, who’s working on her doctorate while examining how Tolkien’s and Jung’s Red Books imaginally (but separately in time and place) interweave. I’m going to point to a couple of her presentations that are on YouTube because they “concresce,” they interweave, in many ways with my own recent thinking.

In her talk on Whitehead and Archetypal Cosmology, amongst other things, Tarnas describes how our participation in the world and ours and others’ lives is also our participation in the archetypal through how the archetypal actualizes in this world. By “consciously engaging with archetypes,” through art, imagination, ritual, experiencing, and so on, we interweave and contextualize future expressions of archetypes with what we do with them. That is, we can manipulate and influence—to whatever degree—how archetypes manifest in the future by how we manipulate them in the present. At the same time, past iterations of those archetypal expressions are still with us, affecting us, now.

While Tarnas comes at this topic via Whitehead, I want to put what she argues into context with anthropologist Tim Ingold’s line model. In his rather philosophical Life of Lines, Ingold argues for a line model of understanding the world rather than a materialist or object-oriented model. He characterizes materialist and dualist perspectives focusing on being, and thus on being static and fixed in place. In contrast, his line model points to becoming. Ingold argues for lines as “Life-paths” of action, process, intention, and incidence, in “circulations of affectivity and nourishment.” The world and ground are places where lines come together and are continually generative, producing more lines. For example, plants grow in the earth through lines, and even the earth is a series of lines spreading out all around us rather than being merely a surface upon which we act. Our lives and paths through the world—our choices and actions and family lines and timelines and literal movements—are our lines. We have been woven from the lines before us and coming together as us while we weave with others in generating futures.

Lines weave together, knot, or, to borrow another metaphor from Ingold, form choruses.

The lines of the plants and landscape and our family lines and the lines of the people and animals and more that we know and engage with—even (especially?) the weather and paths of the stars in the sky—all weave together through our respective lines. In Life of Lines, Ingold tries to articulate a human and non-human view of personhood and agency that grants not autonomy but interconnectedness with intention.

In these senses, Tarnas’s use of Whitehead in getting at Archetypal Cosmology aligns with Ingold’s line model: the lines that have traveled to arrange themselves into the present are still there, but we have to engage with the lines/world as they are now. Similarly, those past instances of the archetypal remain with us even as we are always participating with the archetypal in the present—consciously or unconsciously.

Let me try to offer an example. Astaroth existed in her various ancient world expressions, and those expressions remain with us today. However, humans have been engaging with Astaroth in any number of ways along the way, including as a demon in the spirit lists and as one of the Chiefs in the True Grimoire, and still today as part of a chorus of other/divine/demonic feminine voices in a choir with Babalon, the Sibyl, and other beings and forces. And how humans engage with her today will influence how humans will experience her 1000 years from now, but then, so will she influence how humanity turns out.

In a related manner, there’s something in how humans imagine their landscape, and I think Tarnas’s observations on how relationships and even truth are discovered through imagination line up with this. Landscape, the world around us, “trajects” us. To point to Augustin Berque again: “Trajection [is] that ‘movement’,” that line, “that transference from self to world (but the world as agent, as setting, as stage for other subjects)” and back again.[qtd. from here] Our gaze—imaginal and otherwise—and experience of the world reaches out and penetrates the world even as it penetrates and changes us in turn. We witness the land and imagine and “see” what lies beyond us, and that includes the spiritual “reflection” and what’s around the edges of the mirror or waters. And that act of reflection on our part is probably just an artifact of how we get ourselves to imagine/see that aspect, that imaginally-deep part of the world.

So, we relate to the landscape, and we imagine the land and its (supposedly hidden) depths, and that imagining is also perceiving. And as Tarnas argues while discussing Tolkien’s use of landscape in Lord of the Rings, the land makes the myth, but the myth carries the land with it. Landscape provides context and space, including imaginal space. She wonders if the shrinking of fae in myth and legend correlates to where western culture imagined space for them to exist—with less space, they shrink for us to accommodate them into our (shrinking) imaginal engagement with the world. As the west categorized and charted what it imagined the world to be, it eliminated the places where the west could imagine the fae to live. However, once the west consigned them wholly to the imagination, then they could assume whatever size they wanted again.

While I was out and about the other day—my walks have been enriching of late—I found myself feeling an eruption of ideas about scapegoats.

The Scapegoat by William Holman Hunt. This goat is not happy.

While scapegoating may have biblical origins (Leviticus 16), scholars have often seen scapegoating as an exorcism of sin from the community, and it has these days become far more associated with social and psychological pathologies. Some folks also approach scapegoating in terms of community atonement.

However, I had a different sense that may be aberrant but has operative merit. Sin and corruption and community discontent is always potential. In any community, these problems are always potential problems. Is there efficacy in ritually bringing forth that potential sin and that which festers in the spirit of the community, and in bringing that forth and anchoring it to a goat. Or an effigy. Or to something (or someone) else. In this sense, scapegoating can take on a preventative purpose: a controlled eruption (conjuration) of the social problems of the community as a spirit and then enspiriting a goat in order to then cast it out, to exorcise the enspirited goat to the wilderness. Of course, you populate your wilderness with the demons kicked out of the city, but the wilderness was already a dangerous place. I think this process probably works well with effigies and burning them, as well.

However, besides that, I realized something about the bringing forth of that imagined, potential sin and corruption from the community—of reaching forth for the spirit of that sin and corruption—and letting it well forth into conscious human reality within a ritual frame in order to let that spirit actualize and even materialize but not within the community, within the goat instead. I saw how much magic overall actually works in this manner. How many celebrities do we costume and imagine into becoming living embodiments of some desire or potential of the community? How many women have the media tried to channel forth Babalon through while trying to bring forth Hercules or Perseus via action heroes? Even sovereignty works in a similar manner, as political leaders and princes assume the port of power in order to have that power well forth from where it otherwise waits in potential.

You see, as we participate with the world and imagine it while it penetrates us and interweaves with us and shapes us as we shape the world—we can also call forth that imaginal depth into landscape, into animals, into ourselves.

That said, how much do the landscape, the plants, the animals, the stars and planets, and the spirits do the same to us?