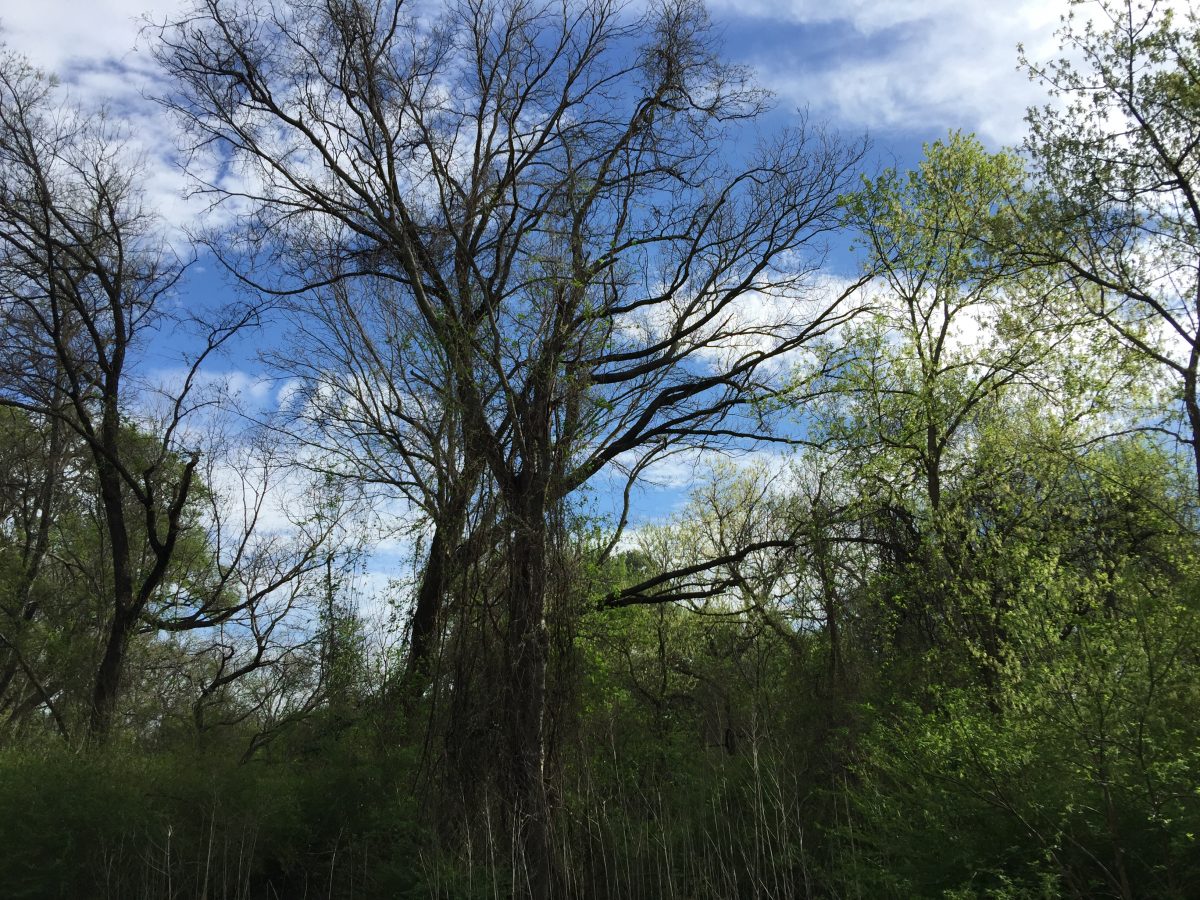 I am sitting in the Lebanese restaurant that is my go-to when I think I can talk the roommates into going. It’s late afternoon, and the sun is just at a point where I have to lean in at the table to get out of its blinding. A window is open ahead of me, and the sounds of the city are muted, and the breeze and trees are louder, the trees and sky competing with the street and mini-malls.

It has been a lovely spring thus far, the trees coming into green, the winds kicking up, the skies filled with clouds and azure. It has felt like the most beautiful spring I’ve ever known here, and I wonder how much of that is the season and how much of that is my ability to stand attendant within the quickening world about me, to stand and let the world move through me, to look beyond the paper skin of the city and neighborhoods.

I want to pull myself up into the sky and soar, but not like a superhero—not some super-leap or bird-like gliding, but to rise up like the wind and move high above, to be the wind and move through the atmosphere as I will—in surrender to suspension and the casual breath of the airs. I jot thoughts into the Notes app on my phone as they move through me—

How do the trees and land spirits alter reality?

Dive deep under the surface of the world, and there are the earth and soil and land wights and wyrms—the mirror of the sky—an uneven mirroring, where what’s on the other side is far deeper, and you have many mirrored images rather than the one—the Dreaming and media and all the dreamt and undreamt media—who do we see ourselves mirrored as on TV and movies and art and lit?

Dive into the land, sea, sky—the city, too—

The landscape goes down deep, not just into soil and stone but into time—but for as paper-thin as the city’s dream can seem, I can see moving horizontal into deeper branches, through signs, symbols, family lines in time—

Listen, meld with the trees and wind—but learn to talk to them—

Part of it, I realized, was in the branching—branching possibilities, choices, and more—the play of probability and choice. Of course, because I was younger, I told myself there had to be the Mystery or Secret of the Trees, rather than mysteries, secrets.

Today, I think about “the language of the trees”—but that language is also in part the language of the airs, the azure, the stars, the soil, the concrete, and more. I think about fantasy novel sorcerers learning the language of the winds to get their attention, to talk with them, to think thoughts of the airts. I think of how that suspension of self—the offloading of consciousness into the surrounding landscape and skies and more—is necessary to find my own winds, to find my own trees—or to find them within me and think tree and windy thoughts so I can speak tree and windy things.

The rub, I reflect quietly to myself, is that conveying human intention to tree and wind and land requires a more practiced translation. Translation is already a fraught intention amongst human words—I cannot but help think about other associations of translation—“a change to a different substance, form, or appearance,” “a transformation of coordinates in which the new axes are parallel to the old ones” (yes, that one actually seems apt in thinking of trees and winds and place), and I ponder the translation of relics and thus translation’s etymology—to transfer, to carry across something. I ponder how relics defined, enriched locations, the language and meaning of place, and how, in deeper ways, translation of relics also resulted in a translation of places.

I think about how getting in good with the spirits of place can result in beneficial results in your life—a general “uplift”—and I wonder how much it’s less bartering with them, pacting with them, though some of them can, and how much it’s more learning how to con-verse, to turn with and among them, to become part of that forest, that sky, that season, that enchantment of concrete, steel, and plastic, and moving and living and soaring along their depths and rhythms rather than something necessarily trans-actional—

Some spirits I have noticed as a distinguishable other from me, even if they may move through me, their voices resonating through and out of me. With others, it is far more a sense of being enfolded within—the forest is not the trees—

—the forest is the trees, the mycelium root network, the other plant and fungal species living alongside the rest, the animals, the sky and wind and storms and sun and moon and stars, the people who live and shape the countryside and move through the forest—

We think we are distinct from the forest, but we’re within or in relation to the forest: we are the forest.

And forest language, the tongue of the airs, the tree mysteries, the translated dead buried or otherwise moving through the bodies of the wood and breezes and shadows and moonlight—human intention starts to slide away into something Other.