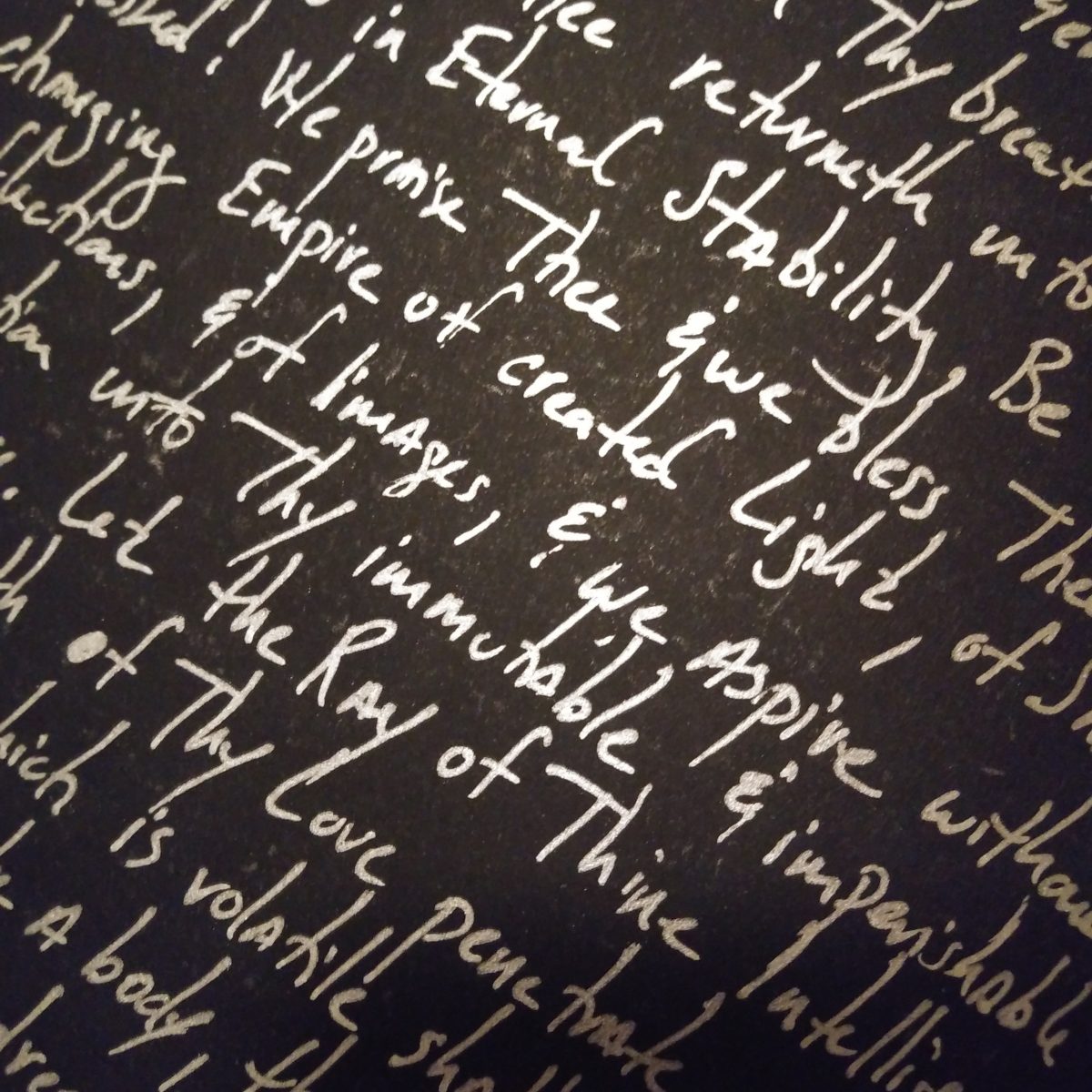 I’ve had a fondness for books and journaling for ages, and I remember when I first got into magic, I got a bunch of little hardcover, slim journals from Walden Books in the mall and was writing my various occult secrets and such into them. (In hindsight, I did not have many occult secrets.) I gave them names with pretentious malatinous titles* and Roman numerals and little glyphs and things that seemed important or significant or pertinent.

When I got back into magic, I resumed journaling. I had a few Moleskines back before the quality dropped to “even worse.” I did a lot of legitimate self-reflection in them, some dream journaling, poetry, and more. I got a few leather-bound journals I used for magical notebooks (just started XXVIII). It wasn’t until a little later that I decided I wanted an actual “working book.”

For a while, I got a decent binder, a few clear plastic dividers I could slide illustrated section breaks into, and I printed out a bunch of my working ritual tech, hole-punched them, and put them in there. I still have and use this binder, especially for novenas, remediation business, the periodic Orphic hymn that I know is in there, but which isn’t immediately elsewhere.

However, I had dreamt of my book when I was younger, and I saw it again in visionary modes: black paper with silver writing, a silvered cover with a particular design. I knew I had found my people when Gordon White described his sigil aesthetic as essentially the same. I pulled the name for this volume from the imaginal, got a Pentel black sketch book, a lot of silver paint pens (you go through them so quickly), and I started adding various bits of tech into it. I had my pre-2017 metaphysics, such as it was, in the front.

My thinking was that the silver would show up better in low-light environments, like candlelight, and that proved mostly accurate. I also realized I could enchant my working book—basically, a book I could do various workings from/with—so I timed several enchantments, so that while I was using and holding this book, I was also holding several protective and empowering charms. I also decided to put several reference tables in there.

That said, I wanted something more with this volume. I remember stories of old agrippas—legendary magical books named after Agrippa that were possessed by devils, were animate and ornery things which had minds of their owns, needing to be bound with chains and silver and holy relics. For some reason, they often seemed to be stuck in farmer’s barns. And while I didn’t want one of those precisely—I mean, feel free to send me one, if you like—well, the idea of book-as-person, as inspirited object, has always been one that appeals to me, and it’s an idea that has had recurring cachet in the West.

I spoke with some of the spirits I have relationships with. One said to take it into the stacks of my university library, to the actual magic/occult/psi/wyrd shit section of the Library of Congress catalogue system. I was to do an invocation and get into the right visionary headspace—not quite just that library, but also Other Libraries—and to place it on the stacks at the place that felt right and to then take it from the stacks a ritually significant number of times. It was as if I was adding that book to that Other Library, making it of that Other Library, and then taking it back into my possession again. I believe I opted for a Mercury hour on Wednesday during a period where the Moon and/or Sun was in a Mercury-ruled sign.

I did other things with this book, too. I consecrated and stuck wormwood and mugwort into it. They’re still there. I anointed it with the oil of St. Cyprian (#1, in case you were wondering, from ConjureMan Ali’s chapbook—because that’s what I had made at the time, and it was the best of the choices). I added the image of a spirit I was cooperating with at the time. I had selected glyphs and seals.

And I have used this working book often over the last couple of years. It’s my go-to for doing my daily prayers and a few specific operations. When I’m launching the Heptameron invocations for Sunday, I’ve got this book in hand. When I’m rattling off barbarous names from the Hygromanteia, I probably have this book out instead of the Hygromanteia. I’ve got several Orphic prayers and devotional invocations in here, as well.

I mean, I also made an “e-grimoire,” something I could load on my phone as necessary or when I didn’t want to bring the book into particular locations. I’ve got a Word doc I can load as on Kindle and cloud copies. And I have charms hidden in my phone case, too. I’ve been doing a ton of small group lunar mansion work with Google Docs and voice chat.

However, I’m reaching the point where I want to re-do my working book. My tech and practice has shifted and matured over time, and things that I thought were neat that I put into the original book, I don’t use anymore. There’s one spirit ally I parted with on less than ideal circumstances whose image and name are still in this book, so I fastidiously try to avoid that page. And, well, I’m pretty sure I could make a better book now.

That said, I have a new pen I’m going to use. I’ve started setting up elections for consecrating charms in the front of the book. It’s a classier-looking volume, already anointed and consecrated in part, with white paper. I reached the point where I’ll just turn off the lights when it’s time to sit in the candlelight and wait/reflect/meditate. I also want to use fewer silver paint pens. I’ve been holding off on starting it because it’s a time investment to do such a thing.

Meanwhile, well, José Leitão has told me that, from what his research has showed, a Book of Saint Cyprian only requires the book to have the prayer of St. Cyprian in it. Just one. And, well, I have a bunch I’ll put in, some of which are apotropaic on their own, by their very presence. There are PGM charms I plan to incorporate, as well as adaptations of PGM spells. And so on and so on.

And I like having such a book—and I like handwriting it out even as that’s a lot of handwriting because it makes the book that much more an expression and extension of my practice, my allies, and myself. I also have a better idea of how to inspirit things these days, and while I might do that library trick again, I think I can do that better now, too. It’s also cheaper for me to do so than to pay for printing and binding a lone prestige volume.

There’s also something necromantic about books—Al Cummins has pointed to this fact in the past, that books allow us to speak the words and voices of the dead, and Gordon has pointed to something very similar recently, too. There’s also something wibbly-wobbly about how books relate to time. With a book, you can give voice to the dead, but it’s also as if the same words are being said again that others had said that the writer had said and written at some legendary point in time. And so, every speaking of an invocation from a book is, in a sense, every other speaking of that invocation from the book.

I also like the idea that, with some heads-up, I could grab it and a couple of other books and be pretty good to go. I don’t need this book, per se, but I like having it on hand. I like calling up a spirit while having this book full of consecrated charms in my hands. And if I’m doing a Cyprianic banishment, this book is often what I have in hand as I’m doing it.

What’s your go-to book? Do you have a working book or book of shadows or a pile of Google Docs you pull up on your phone?

* Do you see what I did there? Meanwhile, Latin nerds, be gentle. I have small Latin and less Greek.